Ahmedabad: In an all new form of diplomacy, Japanese Prime Minister Shinzo Abe took part in an eight-kilometre-long road show with Prime Minister Narendra Modi, a first -of its kind by a foreign leader from Ahmedabad Airport to Sabarmati Aashram located on the banks of the River Sabarmati.

Prime Minister Abe was dressed in a blue Indian-style Nehru jacket and his wife Akie Abe was attired in a beautiful pink salwar-kameez for the grand roadshow. Various cultural performances were held en-route to Sabarmati Aashram.

Earlier, Prime Minister Abe and his wife were received by Prime Minister Modi at the Sardar Vallabhbhai Patel International Airport in Ahmedabad, Gujarat . The former was accorded a tri-services guard of honour and given a ceremonial reception on his arrival.

Prime Minister Abe is here to attend the annual India-Japan Summit to take bilateral and strategic ties between the two countries forward.

This is the 12th edition of the summit and the fourth meeting between Prime Minister Modi and and his Japanese counterpart. The summit will be held in Gandhinagar.

Both leaders are expected to review the recent progress in multifaceted co-operation between India and Japan under the framework of their ‘Special Strategic and Global Partnership’ and will set its future direction. 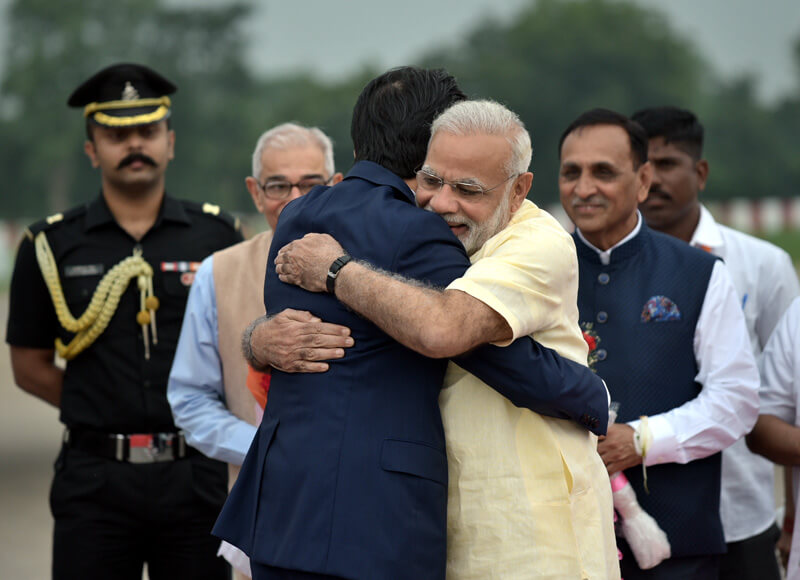 Both will also attend a function to mark the commencement of work of India’s first high-speed rail project between Ahmedabad and Mumbai.

The train is expected to significantly reduce travel time between the two cities. Japan is a pioneer in high-speed rail networks, and its Shinkansen bullet train is among the fastest in the world.

An India-Japan Business Plenary will also be held.

Prime Minister Modi on Tuesday said in a tweet that India truly values its ties with Japan and looks forward to further boosting bilateral relations in a wide range of areas.