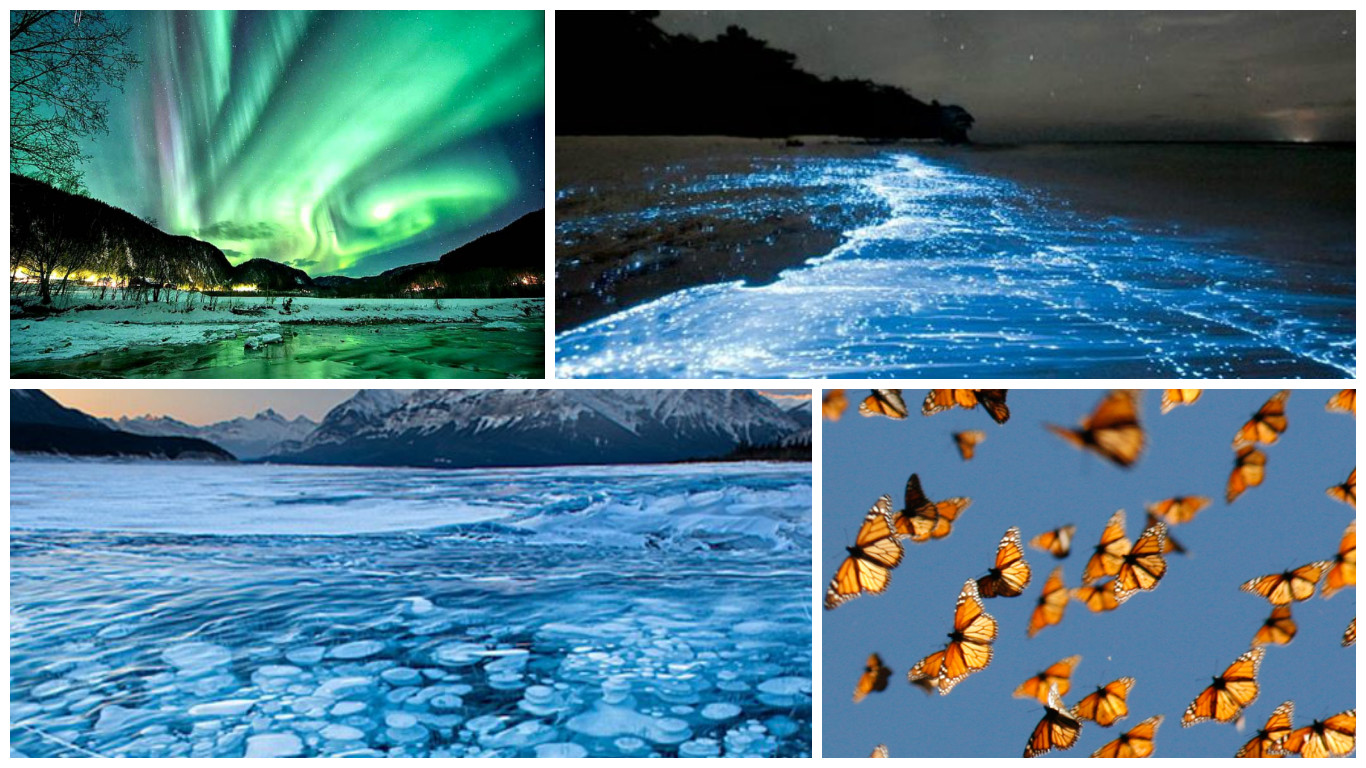 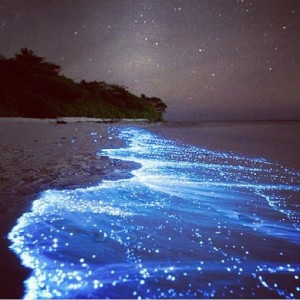 Bioluminescence is a rare occurrence which is produced by algal blooms. The blooms carry and support millions of the bioluminescent dinoflagellates, which in turn use bioluminescence as a defense mechanism to escape predators. It is a wonder that can be seen only in the dark, and the fun part is that the glow becomes brighter with the more disturbance you cause to the phytoplankton, hence creating a wonderful splashing experience in the water. The view of a beach lit up by this phenomenon is majestic and can be observed in specific locations around the planet. Some of these places are- Maldives (Indian Ocean), Jamaica (Luminous Lagoon), Puerto Rico (Mosquito Bay) and Indonesia (Bali). 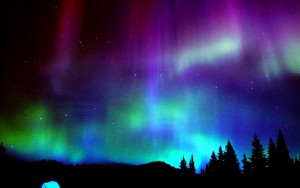 the collision between electrically charged particles from the sun, that enter the earth’s atmosphere, a beautiful phenomenon takes to rise. These are the bright dancing lights in the sky, called as the Aurora borealis, or more commonly known as the northern lights. This magnificent wonder is unique to magnetic, north and south pole. The colour of the lights depends on the types of gas particles colliding, the most common of which is a pale yellowish-green colour, produced by oxygen molecules located about 60 miles above the earth. The more rare red auroras are produced by high-altitude oxygen, at heights of up to 200 miles. Nitrogen produces blue or purplish-red aurora. The best places for observing the phenomenon are- over the southern tip of Greenland and Iceland, the northern coast of Norway and over the coastal waters north of Siberia, which are all concentrated at the north pole, hence acquiring the name- Northern Lights. But, the South Pole also has more rare, but just as beautiful Auroral displays, which have been observed in a ring around Antarctica and the southern Indian Ocean.

The mountains in the Zhangye Danxia Landform of China are an unbelievably astounding view. The beautiful seemingly painted effect of the hills has been formed by the pressing together of layers of different colored sandstone and minerals over 24 million years, further secured by tectonic plates. It is a sight, the likes of which have yet not been found anywhere else on the planet. 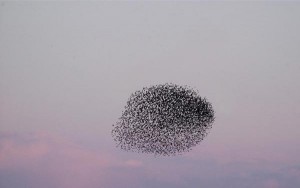 During the spring season,in Denmark, millions of European starlings flock together to give a breathtaking performance, which has come to be known as the Black Sun. The birds gather from all corners to form awe-inspiring formations in the sky. The truly splendid phenomenon begins precisely half an hour before sunrise, and can be seen throughout the marshlands of western Denmark, from March through to the middle of April. 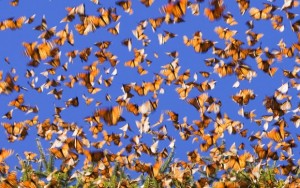 Monarch butterflies (Danaus plexippus) perform annual migrations across North America, given the fact that they cannot withstand the cold winter weather, which looms over most parts of the United States. But the butterflies’ climatic concerns give out for one of the most spectacular natural phenomena, as millions of beautiful butterflies fly hovering over the States. This phenomenon can be witnessed every autumn when the winged beauties travel to the warmer parts of either south or west, Mexico and Southern California being their most frequented destinations. 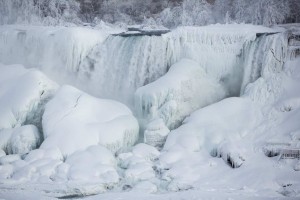 Not a usual phenomenon, the Frozen Niagra Falls are a sight which will truly take your breath away. In February 2015 this immensely rare occurrence took place when the United States side of the falls was almost completely frozen. This happens due to the extremely cold temperatures caused by the Polar Vortex, and in the past few years, parts of the famous falls, if not the whole of them, were frozen in the winters, both in Canada as well as the US. 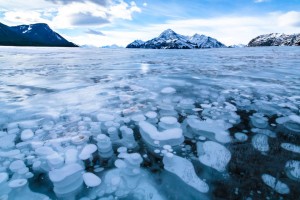 At very low temperatures, methane gas bubbles are formed underneath the Vermillion Lakes in the Banff National Park of Alberta, Canada. The beautiful and surreal phenomenon was tracked down by Canadian photographer, Paul Zizka, after which they caught worldwide attention with their unique aesthetic appeal. 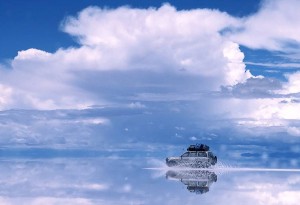 The largest salt flat of the world, Salar de Uyuni of Bolivia, turns into an enormous mirror to the sky during monsoons. It makes for one never to forget sight which will fill you with awe at the wonders of nature. It is often called as the ‘Mirror of the heaven’. 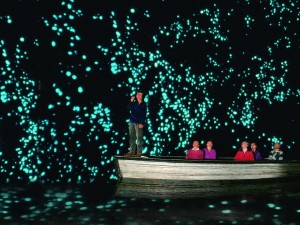 The Waitomo Glowworm cave of Waitomo, New Zealand is populated with glow worms, called Arachnocampa Luminosa. To enjoy the spectacular sight, the New Zealand tourism has arranged boat rides, where one can slowly get captivated by the starry wonder while floating along the Waitomo river, that flows through the cave.

10. The Turquoise Ice of Lake Baikal 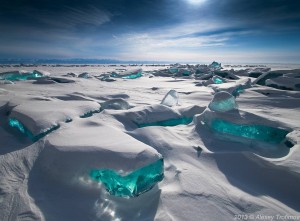 Located in southern Serbia, Russia, the Lake Baikal id the largest freshwater lake on the entire planet and contains 20% of the earth’s fresh water. It is home to thousands of varieties of flora and fauna, of which almost 1,600 are endemic to the lake. Apart from the many others wonders that the lake possesses, it also gives place to the astounding phenomenon of “turquoise ice”, a truly magnificent sight formed after the lake freezes in the winter.