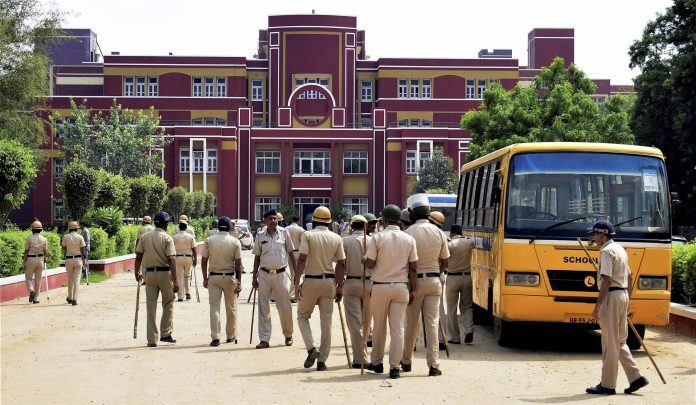 The Education Minister of Haryana Ram Bilas Sharma said on Sunday evening that after the Horrific Murder case in Ryan International School in Gurugram, the Govt has decided that the school administrations of all private schools across the state will be responsible for picking up and dropping off all the students. The schools not complying with this will be dealt with strongly. Guidelines for the same will be issued on Monday.

The Minister was meeting with the representatives of the parents of the students of Ryan International School at the office of the Divisional Commissioner(Gurugram) D Suresh’s Camp Office. Sharma also maintained that the School administration and the owner of Ryan International will also be investigated under the Section 75 of the Juvenile Justice (Care and Protection of Children) Act, 2000.

Ram Bilas Sharma also informed the media that a 3 member Sub-Committee has been formed by the District Administration and it will submit a detailed report on Monday after investigating all the security concerns. It was observed by the Sub-Committee that not only was there no outer boundary of the school allowing anyone to enter the premises but also there were no separate restrooms for the 40+ school bus drivers and conductors. Moreover, the window panes of the children’s toilet were found broken.

After the Sub-Committee submit its report, a FIR will be lodged in the case with mention of school administration and the owner of Ryan International and necessary action will be taken. The Education Minister assured the parents that if they are not satisfied with the Sub-Committee’s report, the Govt. won’t hesitate in involving any investigating agency of the country. But he believed that once the report is produced in the court with other evidence, everyone will be satisfied and no one will be spared from School administration to the owner of the school. On Parents’ request, Monday has been declared a holiday for the Ryan International school.

Also, the liquor store near the school premises will be taken down and no one will be allowed to put up a liquor store within 400m radius in all the schools of the state.

Sharma informed the media that a lot of issues were discussed at the meeting and on the issue of cancelling the recognition of Ryan International, the parents said that there are around 1200 students in the school and it won’t be a good decision for their future. So Ryan International school will keep its status as a recognized school.