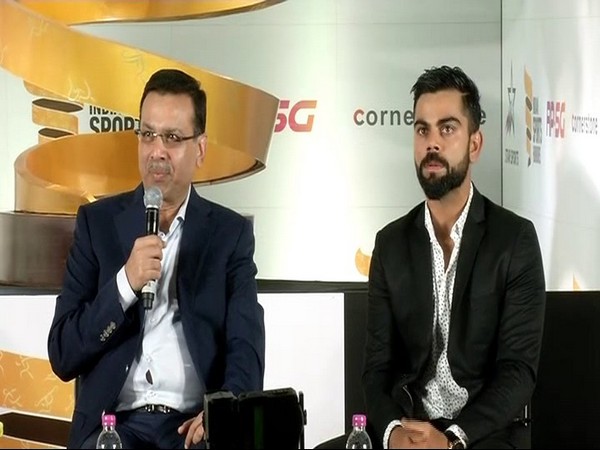 Indian skipper Virat Kohli and business tycoon Sanjeev Goenka have joined forces to launch sports award under which the sports personalities will be honoured for their outstanding achievements here in the national capital on Friday.
According to the new initiative, the sports journalists association, sporting legends and fans will identify one player from each sport who will not only be honoured with the RPSG Indian sports award, but also be provided with the financial support.

While national badminton coach Pullela Gopichand will head the jury, Kohli has already exempted himself from being in contention to receive the gong ever.

Speaking at the launch of the unique award, Gopichand said that it is great to see that the sports journalists are part of the selection process as they are the ones who are in constant touch of the players’ performances throughout the year.

“It is very important that the sportsperson need motivation. Not only the people who are playing and winning the awards, but these awards actually motivate the youngsters to take up sports, the budding ones to actually aspire like next year I can win this award. So, awards are very important in sports person’s life,” Gopichand said.

“I think the selection process could not get any better, with the sports federation journalists getting involved because they are the ones who are in constant touch and reporting about sports in general. And also the fact that you have eminent people sitting and judging, it will ensure that the right kinds of people are picked up,” he added.

ALSO READ: Ronaldo is from another planet: Zidane

Meanwhile, Kohli insisted that he had always believed that there is a great need to promote other sports than cricket in India, something which could not be achieved without proper facilities.

Asserting that this is the reason behind him being associated with the initiative, the 28-year-old announced a support of Rs 2 crore annually through the Virat Kohli Foundation for players from other sports in India.

“India has made rapid strides as a sporting nation. The day of being a one-sport country are behind us. The time is right to introduce an institution that will recognise our top sporting achievers and put the spotlight on those, who are expected to do the country proud in years to come,” Kohli added.

Reflecting on the sports award, Goenka, chairman RP- Sanjeev Goenka group, said, “What makes this Sporting Awards unique is the direct involvement of the premier stakeholders of Indian sports – the sports-persons themselves, legends who have excelled at the highest level, the fans and the media.”

Goenka further revealed that apart from the recipients who will be shortlisted for the honour, there will also be a ‘popular choice’ award, which will be chosen by the fans.

The award ceremony will take place on November 11 in Mumbai.