It’s a biopic about a gangster turned politician Arun Gawli who is currently serving a life sentence.

What’s clearly very different about the film is its matter of fact presentation of the story. It neither glorifies the crime drama as is done in the usual gangster Bollywood movies to encash on the x factor and create saleable masala nor does it let it go dark and heavy as in Black Friday.

It follows the story of the man right through the underbelly of Bombay and uses a non-linear narrative that goes back and forth in time beginning 1976 to 2012 when he was convicted.

The story pieces are all through the characters who are being interrogated and try to present all sides to his personality, the reluctant, the feared, the revered.

Writer Director Ashim Ahluwalia has done a good job of balancing the documentary like feel with an intrigue factor, of a story, which is already known to many.

The cinematography and art direction deserve a lot of credit for creating the right look and feel of the period. They bring to life the dark gulleys, shady shanties, dilapidated buildings, grimy appearances.

The casting director has done a fine job of selecting the ensemble cast. Not only their resemblance to the real life characters(which are later shown with credits) is great but their performances too.

Arjun Rampal who dons many mantles for this one has sure worked hard. He’s co written the film apart from co producing it. His efforts towards his performance as an actor show..right from the right look with a prosthetic nose, to his voice, his Marathi diction, and style of speaking. 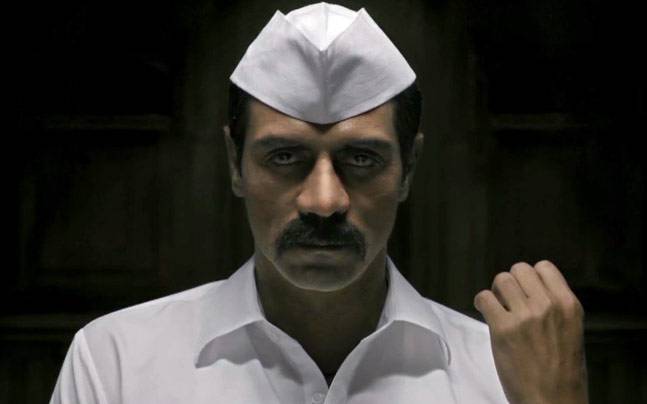 Nishikant Kamat as the police inspector definitely stands out. Aishwarya Raj has done well in her restrained portrayal as Gawli’s wife.

Surprisingly, Farhan Akhtar ‘s cameo as Maqsood( Dawood) is very average. He fails to bring across the don’s aura or style or the menace.

The narration might seem to some as slightly flat or devoid of any highs, lows or surprises but that seems to be the effect that the filmmaker was trying to create as a conscious decision. But he made sure that we were glued till the end. The editor Deepa Bhatia has done a fine job of not letting in any sagging piece anywhere.

Overall, I found the movie good. Its a must watch for those who like those underworld crime dramas without overt dramatisation.