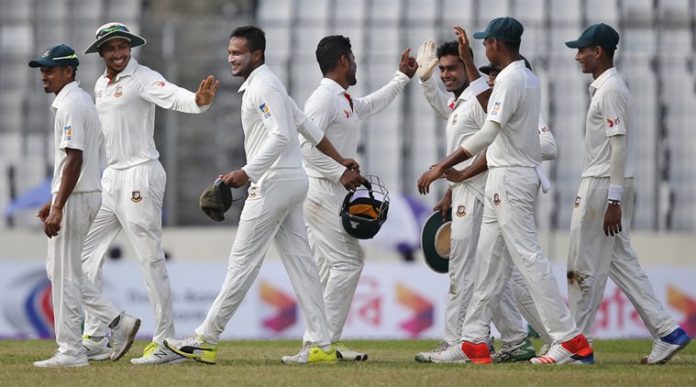 Dhaka [Bangladesh]: Defying all odds, Bangladesh registered its greatest win across all formats as they sealed their first Test win over Australia in what was one of the most thrilling five-day matches in recent times.

Star all-rounder Shakib Al Hasan picked up a fiver each in both innings of the first Test as Bangladesh registered a remarkable 20-run win at the Sher-e-Bangla National Cricket Stadium here on Wednesday.

Chasing 265, the Steve Smith-led side were bowled out for 244 shortly after lunch on Day Four.

The defeat certainly left the Aussies in huge disappointment as they looked to be in commanding position after the first hour’s play on the fourth day with Smith and David Warner carrying the Australian hopes along.

The swashbuckling opener brought up his 19th Test ton and it seemed as Australia would keep their Test record against Bangladesh unblemished. However, all that changed in the hour before and after lunch.

Resuming the day on 109/2, the visitors lost five wickets for just 37 runs in the first session, thus being reduced to 199/7 at lunch.

Pacer Pat Cummins (33*) tried till the end and played some lusty blows to give his side of improving their poor record in the sub-continent.

However, he got no support from the other end as Australia gave their critics one more chance to point guns at them. Josh Hazlewood was caught leg before by Taijul Islam to seal the contest in front of Bangladesh Prime Minister Sheikh Hasina.

ALSO READ:To retire or not to retire, that’s the question: India Vs Australia

Apart from Shakib, fellow spinners Taijul and Mehidy Hassan took the remaining wickets and helped their side register their 10th-victory in 101 Tests.

Shakib was adjudged Man of the Match. He picked up ten wickets in the entire match, apart from scoring 84 and 5 in both the innings.

The win gave the hosts a 1-0 lead in the two match series. The second Test will begin from September 4 in Chittagong.