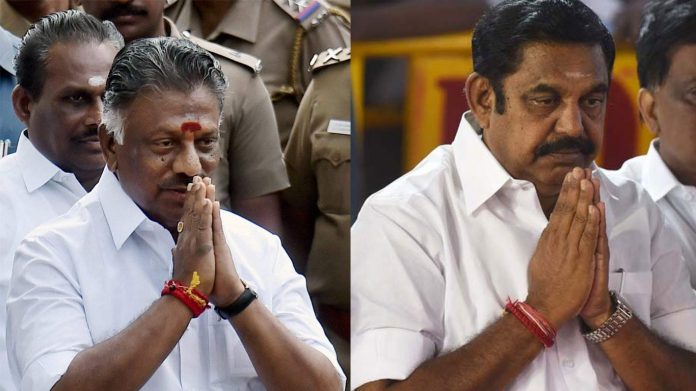 Chennai : A day after the merger of the two warring factions of the All India Anna Dravida Munnetra Kazhagam (AIADMK), Tamil Nadu Chief Minister Edappadi K. Palanisamy’s (EPS) government faced a crisis yesterday, when 19 of his MLAs withdrew their support, leading to the government falling short of majority.

The MLAs resigned when EPS declared, former chief minister O. Panneerselvam (OPS), as his new Deputy Chief Minister, and the convenor of the party.

The MLAs reportedly told Rao that EPS had “forfeited” their confidence of the public as well, urging him to “intervene and institute the constitutional process.”

EPS, OPS and other senior ministers, meanwhile, held meetings at the Secretariat on the threat to the government.

In identical letters submitted to Governor Rao at the Raj Bhavan, the resigned MLAs claimed they were “disillusioned with the functioning of the government headed by Mr. Palaniswami, as there has been abuse of power, favouritism, misuse of government machinery, widespread corruption”.

On the other hand, Stalin has claimed that “twenty two MLAs” have resigned.

Stalin wrote a letter to the Governor and said that any inordinate delay in asking the Chief Minister to prove his majority in the case will pave the way for continuance of an “unconstitutional” government and will destabilise the democratic norms and precedents established in demonstrating the confidence of the House.

Here is a timeline of events that happened in last few months from split to merger:

December 29, 2016: V.K. Sasikala, the confidante of late J. Jayalalithaa, was appointed as AIADMK’s general secretary on December 29 after several party functionaries urged her to lead the party.

February 5, 2017: O. Panneerselvam resigned from the chief minister post and Sasikala was elected head of the AIADMK legislative party and proceeded to stake claim to form the government. Governor C. Vidyasagar Rao accepted Panneerselvam’s resignation, but asked him to operate in a caretaker capacity.

February 14, 2017: Sasikala was convicted in the 19-year-old disproportionate assets case and sentenced to serve four years in jail. She also stood disqualified to take over as Tamil Nadu chief minister.

February 15, 2017: In yet another major development in Tamil Nadu politics, TTV Dhinakaran on February 15 was appointed as the Deputy General Secretary of the AIADMK.

February 20, 2017: Amid an uproar in the Tamil Nadu Assembly, Edappadi K. Palanisamy won the vote of confidence with 122 MLAs supporting him.

March 22 2017: With the bypoll elections for vacant R K Nagar constituency approaching, both the factions staked claim over the party’s “two leaves” symbol. On March 22, Election Commission froze the party symbol recognising the split in the party. In a statement, EC officials said that neither of the two factions will be able to use the “two leaves” symbol. Amid allegations of both camps bribing the voters, the election body “cancelled” R K Nagar bypoll election slated for April 10.

April 17, 2017: In what can be called as a major hint towards sewing up an unprecedented merger between two warring factions in the Tamil Nadu Government, the Sasikala and the O. Panneerselvam groups of the AIADMK met to discuss and deliberate over possibilities of their unification.

April 18, 2017: With TTV Dinakaran facing bribery allegations, the two factions initiated merger talks. At least 25 ministers held an emergency meeting to discuss the possible merger. D Jayakumar, who belongs from OPS faction, in a statement to media, said that their side is open for talks on merger. One of the major conditions for OPS faction for a merger was the expulsion of Sasikala and Dinakaran from the party, an issue which derailed the talks.

June 6, 2017: 21 AIADMK MLAs met Dinakaran at his residence, giving rise to speculations that many of them, who were part of the Palaniswami camp, may openly declare support to Dinakaran. Losing as many MLAs to Dinakaran could topple the government.

August 2017: CM Edappadi Palaniswami on August 11 said the appointment of TTV Dinakaran as party’s deputy general secretary was “not acceptable”, thus paving the way for a possible merger between the two factions.

Party leaders from both the factions held multiple meetings on August 18, after which the OPS faction said an announcement on the merger will be made on August 21, 2017.

As per decision taken jointly by the both factions, former Tamil Nadu chief minister O. Panneerselvam (OPS) has been made new Deputy Chief Minister under the merged All India Anna Dravida Munnetra Kazhagam (AIADMK) government in the state. He will also hold the additional charge of Finance Ministry.

The decision of merger was taken by both factions days after the Tamil Nadu government accepted the AIADMK (PTA)’s two key demands for merger – a probe into former Chief Minister Jayalalithaa’s death and conversion of her Poes Garden residence into a memorial.

The third demand was the ouster of AIA DMK general secretary Sasikala and her family members from the party.