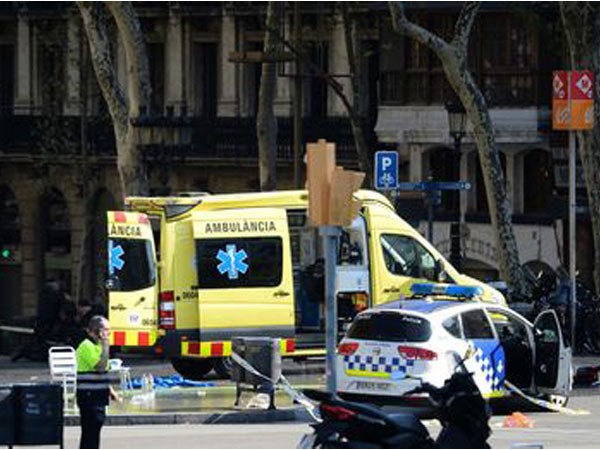 Madrid [Spain], August 22: The Spanish Interior Ministry has confirmed that the four terror suspects detained in connection with the attacks in Barcelona and Cambrils, which claimed 15 lives, will appear in the Spanish High Court on Tuesday.

According to Xinhua, “Driss Oukabir, Mohamed Aallaa, Salar El Karib and Mohamed Houli Chemlal, will appear before judge Fernando Andreu, who is leading the investigation.”

Earlier, the Spanish police confirmed that the suspected driver behind the Barcelona terror attack, Younes Abouyaaqoub has been shot dead, putting an end to the international manhunt for Europe’s most-wanted man.

A van was driven into pedestrians on La Rambla in Barcelona, Spain, on the afternoon of 17 August, killing 15 and injuring at least 130.

Nine hours after the Barcelona attack, police shot and killed five people in Cambrils as they were carrying out a second car attack which killed one woman and injured six others.

Investigators have said that the Barcelona and Cambrils terror attacks are closely linked as that was hatched in a house that the plotters had used as a bomb factory, the Telegraph reported.

An explosion at a house in Alcanar, which is about 125 miles southwest of Barcelona, took place before the Las Ramblas attack. Police currently believe the Barcelona and Cambrils incidents were planned in Alcanar – linking all three events.

An imam, suspected of radicalising the young men who carried out the attacks, died in what is believed to have been an accidental explosion on Wednesday at a house in Alcanar, south of Barcelona.

Spain’s Interior Minister Juan Ignacio Zoido on August 19 stated that the terror cell behind Spain`s deadly twin attacks cell was believed to have consisted of at least twelve persons.

The four suspects are the only survivors of the 12-man terrorist cell.