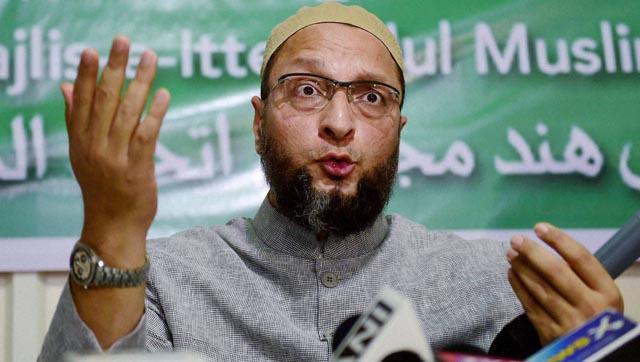 Hyderabad (Telangana): While the Supreme Court‘s decision of banning triple talaq was welcomed by many sections of the society, the All India Majlis-e-Ittehad-ul Muslimeen (AIMIM) has called it a “contentious issue” that demands a more nuanced step than the one taken.

In his argument, AIMIM chief Asaduddin Owaisi highlighted the fact that even the five-judge constitution bench could not arrive at the decision unanimously as Justice Nariman, Justice Lalit and Justice Kurien opposed the view of Justice Nazir and Chief Justice of India J.S. Khehar.

“Triple Talaq is a very contentious issue. That is why you see even in the Supreme Court, there was no unanimity.” Owaisi said.

On being asked if he agrees that the decision is a positive step towards women empowerment, Owaisi said that the number of cases of women being victimised due to triple talaq was miniscule, adding that if the Bharatiya Janata Party (BJP) really wants to empower women, it should “bring a legislation and give reservation to only Muslim women in education and employment; that will be the greatest empowerment.”

“You ( BJP) control your ‘Gaurakshaks’ who have made many Muslim women widows. The Muslim women have lost their children. It is a social evil that is why the Muslim Personal Law Board has taken this up as a social reform movement. And it is only through the Muslim Personal Law Board’s reform programme that this inhuman practice will come down in coming months and years,” he said.

He further accused the National Democratic Alliance (NDA) Government of trying to make India a ‘Hindurashtra’, the pursuit of which will “open a can of worms, as a uniform civil court will not work in a diversified country”. If so, then all personal laws would begin to be questioned, including the Hindu Undivided Family law.

Citing the Shamim Ara judgement in 2002, Owaisi said that the majority decision has already been the law as the 2002 Supreme Court judgement had pronounced that “a divorce will not happen unless and until a reasonable cause and arbitration effort was made.”

Owaisi added that he respects the SC decision, but that there are many issues attached to this decision and “it’s going to be a great, herculean task to implement it on the ground,” as a legislation is not the answer to solving problems.

To cite an instance, he said that the law against child marriage has not been able to stop the marriage of one crore minor girls in Indian villages.

“The minority judgement said that it is an integral part of Islam, but unfortunately the majority didn’t agree with Justice Khehar and Justice Nazir. So even in that majority judgment, other judges have said that personal laws cannot be challenged now, so this is a welcome step,” he said.

Meanwhile, the All India Muslim Personal Law Board will hold its first meeting after the triple talaq judgment on September 10, in Bhopal, Madhya Pradesh.

Earlier in the day, the Supreme Court struck down the practice of Triple Talaq as ‘unconstitutional’ by a 3:2 majority.

The five-judge constitution bench headed by Chief Justice of India (CJI) J.S. Khehar, deciding on the verdict, was seemingly split on the legality of the practice.

Justice Nariman, Justice Lalit and Justice Kurien opposed the view of Justice Nazir and Chief Justice of India J.S. Khehar and dubbed the practice of Triple Talaq as unconstitutional and unislamic.

The Supreme Court further asked the Union Government to formulate a new legislation within six months.

The apex court reportedly referred to the abolition of triple talaq in the Islamic countries and asked “why can’t independent India get rid of it.”

The decision came soon after the apex court resumed the hearing on the matter on Tuesday morning.

CJI Khehar, while pronouncing the judgement, however, upheld the practice and said, “Talaq-e-biddat is not violative of articles 14, 15, 21 and 25 of the Constitution.”

The CJI, further using his power under Article 142, directed the Union of India to form a proper legislature regarding ‘talaq-e-iddat.’

CJI Khehar said that all parties must decide keeping politics aside.

The constitution bench had reserved its verdict on May 18 after a six-day marathon hearing.