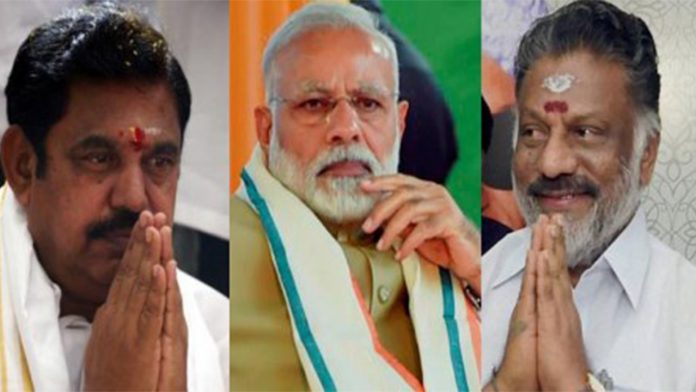 New Delhi [India]: Prime Minister Narendra Modi, on Monday, congratulated O Panneerselvam, who was sworn in as the Deputy Chief Minister of Tamil Nadu under the merged All India Anna Dravida Munnetra Kazhagam (AIADMK) government, and assured all possible support from the Centre.

He took to Twitter to say, “Centre assures all possible support to CM Edappadi K Palaniswami & Dy CM O Panneerselvam for the growth of Tamil Nadu.”

I congratulate Thiru O Panneerselvam & others who took oath today. I hope Tamil Nadu scales newer heights of progress in the years to come.

OPS, who took over as the Deputy Chief Minister of Tamil Nadu today, has also been given the additional charge of Finance and Housing Ministry.
Earlier, in what can be dubbed as a political turnaround in a state that was embroiled in a political drama till not so long ago, the two warring factions of the AIADMK – one led by Chief Minister E. Palanisamy (EPS) and the other by OPS – announced a merger, citing that “MGR always wanted to see us united, not split.”

The striking part of the merger is that EPS has taken a backseat in the party, declaring OPS as the convenor; EPS will be the co-convenor.

EPS will continue to be the chief minister of Tamil Nadu.

Here are the allocated portfolios in the Cabinet:

– O Panneerselvam and K. Pandiarajan induced into the council of Ministers

– C. Ve. Shanmugam- Minister of Mines and Minerals (hitherto held by M.C. Sampath), in addition to subject presently held by him (Law Ministry)