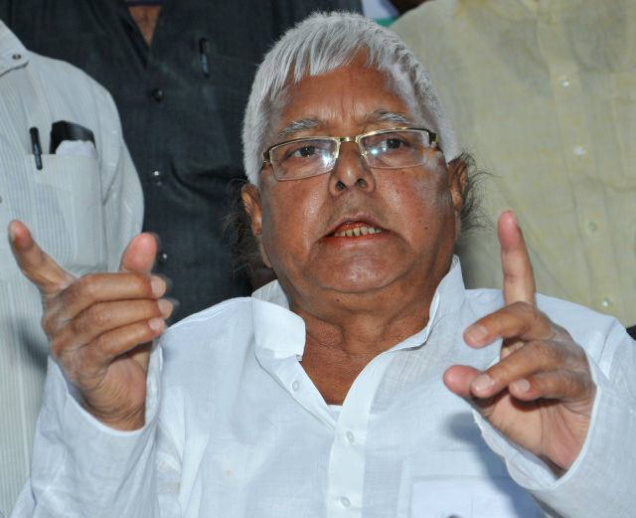 Patna (Bihar) : Responding to the allegations made by Deputy Bihar Chief Minister Sushil Modi, Rashtriya Janata Dal (RJD) chief Lalu Prasad Yadav launched a valiant attack on him and Chief Minister Nitish Kumar, and said that, in the aftermath of the latter snapping all ties with the ‘mahagathbandhan’ parties, ‘Nitish ka dhokha’ was trending in the state.

Addressing a press conference here, Lalu Yadav alleged that while his party had made a complete public disclosure of the property owned by them, the ‘palturam’ chief minister Nitish was using a high pitch to drown his involvement in a host of scams.

“Two things are famous in Bihar – ‘litti chokha’ and ‘Nitish ka dhokha’. By speaking loudly in speeches, he cannot get away with his involvement in scams. I heard him say earlier that those, who indulge in corruption, will not be let free. This is exactly how sinners and defaulters speak. We have declared our property in public; we have nothing to hide,” said Lalu.

Citing the Srijan Scam, where an NGO allegedly siphoned off an estimated Rs. 700 crore of public funds, Lalu alleged the campaign against Nitish and Sushil Modi would continue, until they submit their resignation. Further, the former chief minister also stated that he would approach the Enforcement Directorate (ED) and the Supreme Court over his alleged involvement in the scam.

“Our party rally will end on August 27. Following that, we will approach the ED, the CBI and the Supreme Court. Nitish is the root cause of all corruption. We will not keep quiet until ‘palturam’ Nitish and his ‘santuram’ Sushil Modi resign,” he said.

“The Nitish Kumar-led government has spent crores of money without giving an account for any of the expenditure. Once the expose happens, even Delhi will not be able to save him,” he said.

Earlier, calling out to the ‘Lalu parivar’ over their alleged involvement in multiple land scams, Sushil Modi continued his stint of slamming them, with a detailed report of the property owned by Lalu and his wife Rabri Devi.