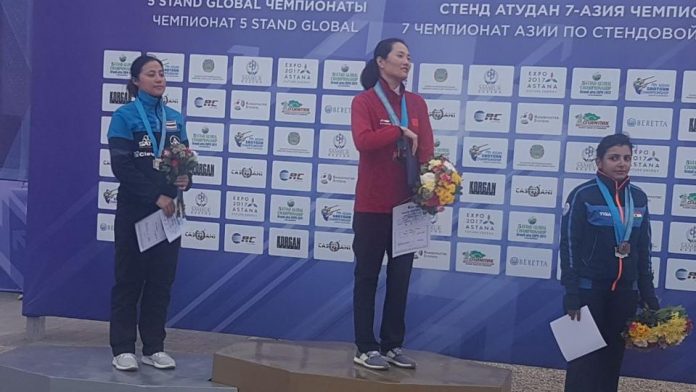 New Delhi [India],: India’s women skeet shooter Maheshwari Chauhan capped off a stellar performance as she won an individual bronze, which is India’s first medal of any colour at the top international level in women’s skeet, on Day Five of the ongoing 7th Asian Championship Shotgun in Astana, Kazakhstan.

It was made sweeter when she led her country in combining with compatriots Rashmmi Rathore and Saniya Sheikh to win the silver medal in the Team event. The trio shot a total of 190, finishing behind gold medalists China, who shot 195. Hosts Kazakhstan won the bronze shooting 185 in total.

India’s day was all about Maheshwari though, when she shot 68 out of 75 earlier in the day to finish on top of the qualification pile of 22-shooters. She led a group of six shooters into the final round. Among them was teammate Rashmmi Rathore who qualified sixth with a score of 64.

It was a quality top six in the final rounds having the likes of Olympic finalists and World Cup gold medalists Meng Wei of China and Sutiya Jiewchaloemmit of Thailand among others. Meng is currently ranked four in the world while Sutiya is ranked fifth.

Reputations held as Maheshwari bowed out in third place with a score of 40 while China’s Meng won gold shooting 55 and Sutiya claimed silver finishing a point behind Meng. Rashmmi also put up a spirited display to finish fourth ending with a score of 32.