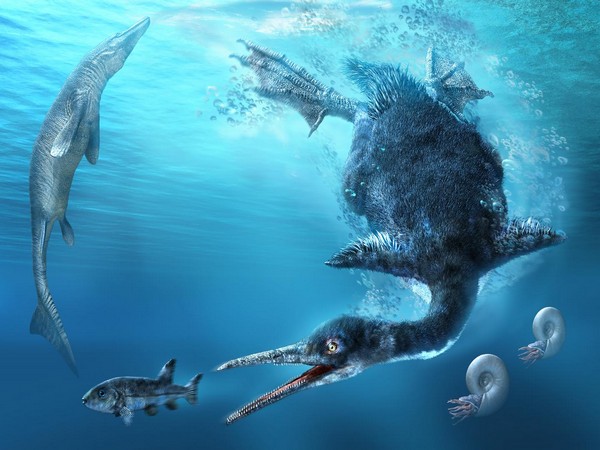 Washington D.C.: During a walk near a reservoir in a small Japanese town, amateur collectors made the discovery of their lives – the first and oldest fossil bird ever identified in their country.

After sharing their mysterious find with paleontologists at Hokkaido University, brothers Masatoshi and Yasuji Kera later learned the skeletal remains were that of an iconic marine diving bird from the Late Cretaceous Period, one that is often found in the Northern Hemisphere but rarely in Asia.

The remarkable specimen, which includes nine skeletal elements from one individual, including the thoracic vertebrae and the femoral bones, is being heralded as the “best preserved hesperornithiform material from Asia” and to be “the first report of the hesperorinthiforms from the eastern margin of the Eurasian Continent.”

ALSO READ: This is how birds get their colour!

Identified as a new species, it has been named Chupkaornis keraorum – Chupka is the Ainu word used by indigenous people from Hokkaido for ‘eastern,’ and keraorum is named after Masatoshi and Yasuji Kera, who discovered the specimen. The bird would have lived during the time when dinosaurs roamed the land.

“This amazing find illustrates the special relationship paleontologists and other scientists have with ordinary citizens who come upon interesting and unusual objects,” said co-author Tomonori Tanaka. “Thanks to the wisdom and willingness of Masatoshi and Yasuji Kera to share their discovery with us at Hokkaido University, they have made a major contribution to science, and we are very grateful.”

The bones, estimated to be anywhere from 90 million to 84 million years old, were unearthed from the Upper Cretaceous Kashima Formation of the Yezo Group in Mikasa City, Hokkaido. The fossil bird consists of four cervical vertebrae, two thoracic vertebrae, the distal end of the left and right femora, and the middle part of the right fibula. The specimen is currently housed in the collection of the Mikasa City Museum in Hokkaido, Japan.

“Hespeornithiforms is the oldest group of birds that succeeded to adapt for diving in ocean. This study provides better understanding in the early evolution of this group and the origin of diving in birds,” added Tanaka.

Chupkaornis has a unique combination of characteristics: finger-like projected tibiofibular crest of femur; deep, emarginated lateral excavation with the sharply defined edge of the ventral margin of that the thoracic vertebrae (those vertebrae in the upper back); and the heterocoelous articular surface of the thoracic vertebrae. Phylogenetic analysis of this study revealed that Chupkaornis is one of the basal hesperornithiforms, thereby providing details of the evolution of this iconic group of diving birds.

Hesperornithiformes were toothed, foot-propelled diving birds and one of the most widely distributed groups of birds in the Cretaceous of the northern hemisphere. These birds had extremely reduced forelimbs and powerful hind limbs, suggesting that they were flightless sea-going predatory birds. Most of hesperornithiform fossils have been discovered from North America so far. The discovery of Chupkaornis, the oldest Asian hesperornithiform, suggests that basal hesperornithiform had dispersed to the eastern margin of Asia no later than 90 million to 84 million years old.

The study appears in the Journal of Systematic Palaeontology.