Commercial airline pilots undergo rigorous training of years to master the art of flying. Even after mastering, pilots have a slim chance of surviving when something goes wrong with the jumbo jet mid air. A Ukranian pilot emerged as a hero of pilots when he managed to land AtlasGlobal-operated Airbus A320 on the runway without any visibility after the windows were shattered by the giant golf ball sized hail balls.

The plane carrying 127 passengers after ascending to 4000 feet suddenly faced the wrath of nature when a hailstorm struck the Airbus. Capt. Alexander Akopov managed to get permission to land the plane Istanbul’s Ataturk Airport which was closed due to the storm, despite repeated warning by the airport officials. 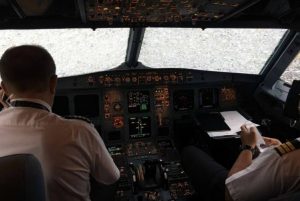 Alexander was finally able to make a heroic landing which saved the lives of all the passengers and made them broke into tears of happiness.

“I have been flying for 30 years. Well, did you see the plane landing? Was it OK? The passengers are alive. It is normal. This is our professional reliability,” Alexander said after landing.

ALSO READ: Two men arrested in plot to ‘bring down a plane with homemade bomb’ in Sydney

Akopov was awarded Ukraine’s Order for Courage award for his presence of mind and expert landing which saved several lives.