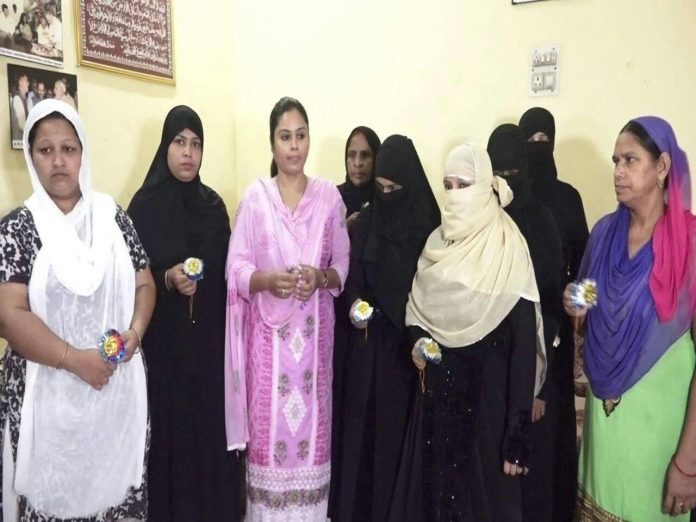 Lucknow (Uttar Pradesh): Although the festival of Raksha Bandhan is special for every brother and sister, but this time it’s even more special for Prime Minister Narendra Modi and Chief Minister Yogi Adityanath.

Both the Bharatiya Janata Party (BJP) leaders will soon get Rakhis sent by Muslim sisters from Lucknow on the auspicious occasion of Raksha bandhan.

Lauding Prime Minister Modi and Adiyanath’s efforts to bring change for the sufferers Triple talaq practice, Muslim women here have sent Rakhis for their ‘brothers’ wishing them to continue their good work they initiated.

“Prime Minister Modi and CM Yogi have supported us in our fight against triple talaq and played the role of being a brother. Because of that we all have decided that we will also take the responsibility of being their sister by sending rakhis to our brother PM Modi Ji and CM Yogi ji,” one of the Muslim women told the media.

Carrying the photographs of both the leaders, Muslim women sitting at Imambada said, “Maulana did not support us, our voices were suppressed but PM Modi, CM Yogi stood by us and raised their voices against this issue. I say, what Modi is doing for the country is very good. What he is doing for women, especially for Muslim women, is very good. We also hope that our brothers will be with us in future as well, we pray for them that Allah will make their efforts even better.”

Another woman urged the assembled gathering to take the responsibility for initiating reform in the Triple Talaq issue. She appreciated the PM’s stand in this regard.

Prime Minister Modi has termed Triple Talaq as a menace that was crippling the lives of Muslim women in India.

During a discussion on the National Commission for Backward Classes, Prime Minister suggested that the political parties should hold conferences for ‘backward Muslims’.

He said the politicians maintaining silence on the issue of ‘triple talaq’ were equally responsible as those practicing it.

He also linked the Muslim practice of divorce to the disrobing of Draupadi in the Mahabharata.