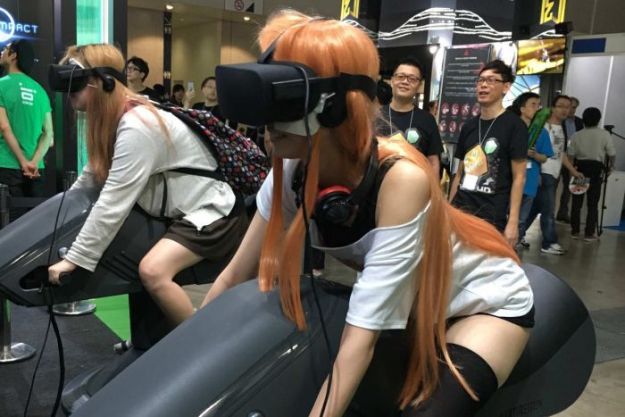 Tokyo [Japan]: In Japan, virtual reality has been gaining attention with an increase in the number of companies, particularly those expanding into the entertainment and service fields.
This amusement arcade game is virtual reality machine that stimulates not only visual and auditory senses but adds aroma and feeling to stimulate the five human senses.

ALSO READ: Scientists unveil how brain works with the help of magic

The company has plans to distribute roughly 1000 machines worldwide, to develop new markets, and sees new possibilities in the amusement arcade business via virtual reality.

This game, which combines virtual reality, motion capture and mini drone consists of multiple infrared cameras to capture the motion of markers attached to the objects to measure, such as people or drones, which then convert 3D positions into virtual reality.

Local content production companies in Kyoto have developed many of the virtual reality contents unique to Kyoto, the most popular tourist spot in Japan.

Virtual experiences of gardens, festivals or various seasons are made possible because of a virtualisation of a tourist attraction, which is a good way to attract tourists also.

“By taking this with you overseas, you can introduce such places and things of Kyoto. For instance, gardens in Kyoto so called Karesansui(Dry Landscape) has impressive features. There will be an audio guide in it to explain why. Also, you can have an art experience like calligraphy on the wall suddenly jumps out in a tearoom. You can develop a story when chasing a bowl floating in the air, etc. There was a request of bringing floats of Kyoto’s Gion festival to France. It is very difficult to transport. But it was possible to bring the VR data there and let people experience it,” said Masahiko Murakami, CEO, Skeleton Crew Studio Inc.

This new technology is sure to make the tourist experience more fun and interesting.