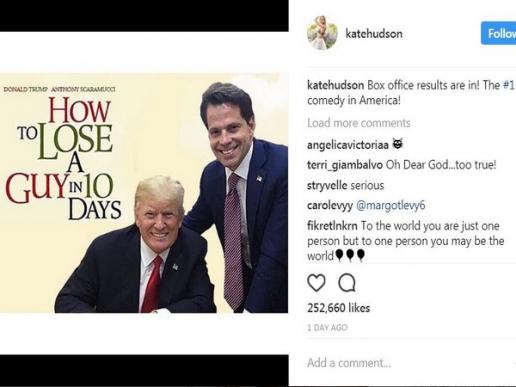 Los Angeles [U.S.A.]: Yesterday, it was announced that Anthony Scaramucci would depart his role as White House Communications Director after just a 10-day spell.
He may have left his job of only 10 days, but stayed in the social-media spotlight on Monday.

As Americans continue to react to his departure, actress Kate Hudson has had perhaps the best reaction of all.

The Oscar-nominated actress took to Instagram and posted a mocked up poster of her 2003 film ‘How To Lose A Guy In Ten Days’.

She captioned the snap, “Box office results are in! The #1 comedy in America!”

In the post, Scaramucci is seen posing alongside Trump, with both superimposed into the movie’s poster.

Another said, “You made it look good, this clown just makes everything he touches look tainted. Funny AF.”