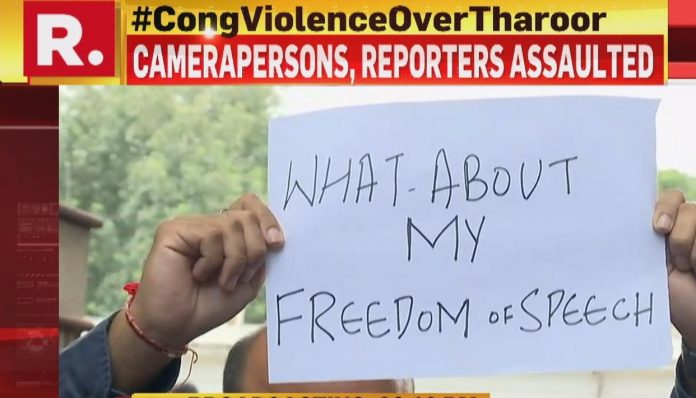 In a turn of events, NewsMobile partner Republic TV reporters were manhandled by the Congress party when they wanted to cover Congress MP Shashi Tharoor‘s press briefing. Republic TV’s crew comprising of Pariskhit Luthra, Sreya, Sakal Bhatt and Shweta Kothari along with their video journalists were stopped at the enterance by the bouncers to cover Shashi Tharoor’s press briefing.

Bouncers have been called in to stop Republic TV from entering.
“We know your intention,” says Congress

Arnab Asks: What is Congress so scared of? #SunandaMurderCaseOpen
Follow the LIVE updates here: https://t.co/lpnVZxoMbs pic.twitter.com/Mqfhw8WhaK

In a massive development in Sunanda Pushkar case, the Delhi High Court on Tuesday questioned the Delhi Police on the two-year delay in the investigation. The Delhi High Court has asked for an additional status report to be filed. On speaking to Republic TV, Dr. Subramanian Swamy said that the court has understood that there has been a delay in executing justice. He also added that the “case went very well” and that the “Court heard all the matters in detail.

” In his plea, Dr. Swamy had questioned the contradictions in the Delhi Police status report and why after 3 and a half years since the death of Sunanda Pushkar, wife of MP Shashi Tharoor, the report continues to be incomplete. While questioned on the absence of comment by Shashi Tharoor, Dr. Swamy said, “Why is Tharoor running away from this case? What is there to hide?.” He also said, “If you love your wife, come and support us.”

On a massive special news broadcast, Republic TV has accessed the statement of Dr. Sudhir Gupta, Chief of Forensic Department of AIIMS, the same doctor who conducted the autopsy of Sunanda Pushkar, wife of MP Shashi Tharoor. According to Dr. Gupta, his signed and attested statement continues to be in possession of the Delhi Police. He has mentioned Tharoor’s name, not once but thrice in the statement and was recorded on October 2014.