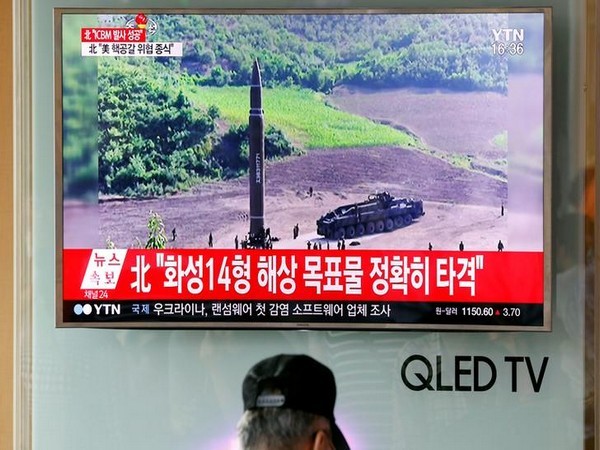 Washington [U.S.A.]: North Korea is likely to test fire another intercontinental ballistic missile on Thursday as July 27 marks the 64th anniversary of the signing of armistice that ended the Korean War.

U.S. intelligence agencies have indicated that defiant North Korea is testing the components to launch another intercontinental balllistic missile or intermediate range missile test from a submarine.

The US intelligence officials also believe that North Korea will be able to launch a nuclear-capable intercontinental ballistic missile (ICBM) by early 2018.

Even South Korean media have cited intelligence and military officials saying transporter vehicles carrying launching equipment had been seen on the move in North Korea.

“North Korea can currently get a missile “off the ground,” there are still a lot of undetermined variables about guidance, re-entry and the ability to hit a specific target,” CNN quoted U.S. intelligence officials as saying.

The intelligence agency has assessed that North Korea has accelerated its intercontinental range ballistic missile program.

“North Korea’s recent test of an intercontinental range ballistic missile which was not a surprise to the intelligence community is one of the milestones that we have expected would help refine our timeline and judgments on the threats that Kim Jong Un poses to the continental United States,” Scott Bray, National Intelligence Manager for East Asia, Office of the Director of National Intelligence said.

The U.S. is watching further testing of North Korean radars and communications that could be used in a launch, but the intelligence assessment is that program remains in early stages.

Under the supervision of Kim Jong-un , North Korea, on July 4, conducted its first successful test of a long-range intercontinental ballistic missile Hwasong-14 ,that it says can “reach anywhere in the world.”

Meanwhile, U.S. President Donald Trump is in talks with China, Japan and South Korea on finding ways to deal with North Korea nuclear and ballistic program.

Trump signaled he could use the US-China trading relationship as to pressure China to force North Korea to act, Trump said, “Somebody said, what cards do you have? I said, very simple — trade. We are being absolutely devastated by bad trade deals.”