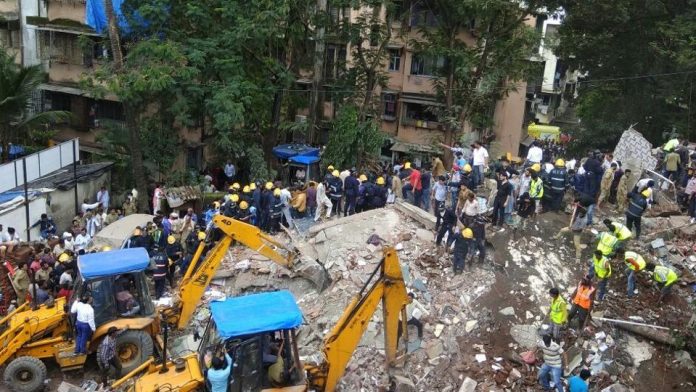 A four-storey building collapsed at Damodar Park on Lal Bahadur Shastri Marg in Mumbai’s Ghatkopar on Tuesday.  A nursing home was being run on the ground floor of the building, according to the civic officials.

14 fire engines, one ambulance, and one rescue van rushed to the spot. All flours housed three to four families.

The building did not belong to the C1 category (Building that demands immediate redevelopment) said BMC.

NDRF (National Disaster Response Force) was called reached the spot after the moments of the incident. The residents of the area joined the rescue operation with the NDRF.

According to an eyewitness, the building shook and collapsed within seconds. The construction was underway on the ground floor which could be an apparent reason behind the incident, according to the sources.

The BMC Commissioner Ajoy Mehta has ordered an inquiry into the matter and the committee has been asked to submit a report within 15 days.