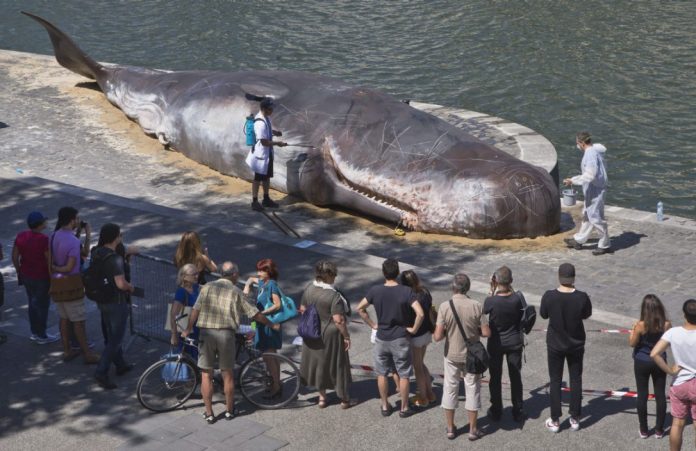 Recently, a sperm whale was found on the banks of the Seine river in Paris. Whales usually survive in salty water – sea, oceans. They aren’t found in freshwater, but there was one such found.

This bizarre state of events does have a logical explanation. The dead whale, although incredibly convincing is a completely fabricated art installation brought to Paris to raise awareness about sperm whales and humanity’s disruption of the ecological system.

The piece of art has been named Captain Boomer, after the character from the novel Moby Dick. It was brought to Paris by Captain Boomer collective, a Dutch art collective that uses the whale model as a means to spread awareness and educate people around the world about whales and the effects we have on their habitat.

The site is quite shocking especially for passers-by, it grabs your attention since it is located in such a public space. This works to the advantage of the collective as attention is what they were aiming for.

One person who came across Captain Boomer in Paris said that the statue even smelled like a beached whale. That’s slightly revolting, but adds to the effect.

Captain Boomer has other such installations across the world, mostly in public space. To ensure, people learn about the sperm whales and their habitat. ccording to the Captain Boomer Collective’s website, the whale is accompanied by scientists who teach people about the whale.