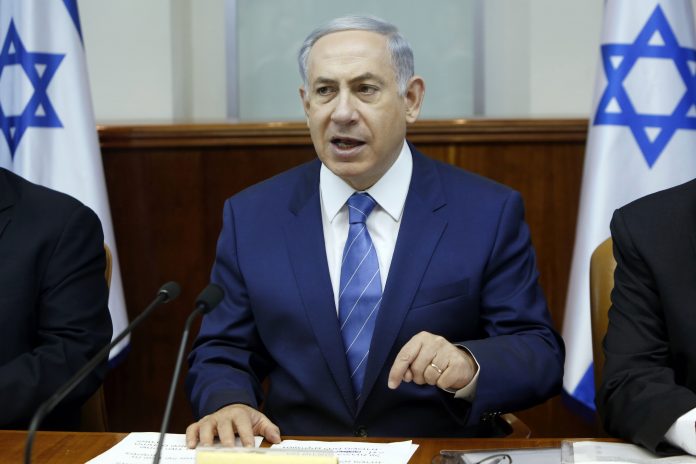 BUDAPEST – Prime Minister Benjamin Netanyahu launched a ferocious attack against the European Union during a closed-session meeting on Wednesday morning in the Hungarian capital of Budapest, telling the top leaders of Hungary, the Czech Republic, Poland and Slovakia that the EU’s behaviour toward Israel is crazy.

The meeting was being held behind closed doors, but Netanyahu’s remarks were accidentally transmitted to the headphones distributed among reporters, though Netanyahu’s people discovered the transmission and shut it down within a few minutes.

“The European Union is the only association of countries in the world that conditions the relations with Israel, that produces technology and every area, on political conditions. The only ones! Nobody does it,” Netanyahu said.

“It’s crazy. It’s actually crazy,” he continued, referring to the EU’s insistence to condition the EU-Association Agreement on certain terms related to the peace process. “It’s not about my interest. I’m talking about Europe’s interest.

“We have a special relationship with China. And they don’t care. They don’t care about the political issues. Indian Prime Minister Narendra Modi said he needs water for his people. Where will I get it? Ramallah? No,” Netanyahu said, adding that Israeli cows produce more milk than any other cows in the world – double the European average
He went on to ask the Central European leaders to “help us and help Europe in expediting the EU Association Agreement.”

He added: “I think that if I can suggest that what comes out of this meeting is your ability perhaps to communicate to your colleagues in other parts of Europe: help Europe – twice. Don’t undermine that one Western country that defends European values and European interests and prevents.”

Hungarian Prime Minister Viktor Orban interrupted at this point and said, laughing, “Mr Netanyahu, the European Union is even more unique. The EU places conditions on the ones already inside the EU, not only the countries on the outside.”

Netanyahu answered, “I think Europe has to decide if it wants to live and thrive or if it wants to shrivel and disappear. I am not very politically correct. I know that’s a shock to some of you. It’s a joke. But the truth is the truth. Both about Europe’s security and Europe’s economic future. Both of these concerns mandate a different policy toward Israel.
“We are part of the European culture,” Netanyahu continued. “Europe ends in Israel. East of Israel, there is no more Europe. We have no greater friends than the Christians who support Israel around the world. Not only the evangelists. If I go to Brazil, I’ll be greeted there with more enthusiasm than at the Likud party center.”

He also told the four other leaders that Israel has ties with Arab countries: “The Arabs speak with us. They speak with us about technology and everything we’re talking about here,” Netanyahu said.

On American policy in the Middle East, Netanyahu attacked former U.S. President Barack Obama, saying, “We had a big problem [in the U.S.]. I think its different now. Vis-a-vis Iran, there is a stronger position. The U.S. is more engaged in the region and conducting more bombings [in Syria]. It is a positive thing. I think we’re ok on ISIS. We’re not OK on Iran.”

“We blocked the border not only in Egypt but in the Golan Heights,” he said. “We built the wall because there was a problem with ISIS and Iran trying to build a terror front there. I told Putin, when we see them transferring weapons to Hezbollah, we will hurt them. We did it dozens of times.”

Earlier when PM Modi had landed in Israel, the mic was left on deliberately as he landed and met the Israeli Minister which was done to send a larger message to the World of the proximity and intensity of the India Israeli ties.