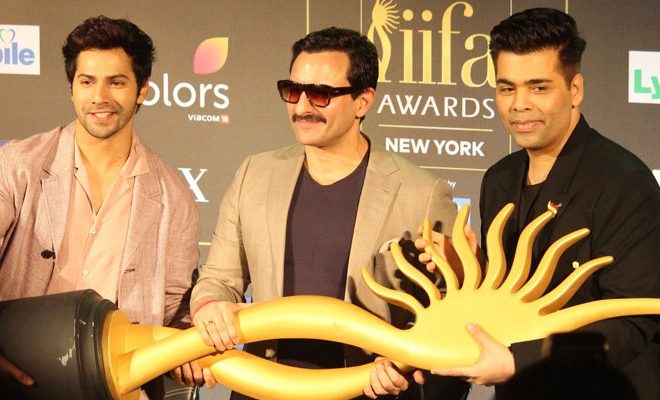 IIFA 2017 managed to stir a lot of controversy, at the epicentre of it all were Varun Dhawan, Karan Johar and Saif Ali Khan. They were criticised for their tasteless “Nepotism rocks” act and mud-slinging at Kangana Ranaut in her absence.

Bollywood Actor Varun Dhawan has now come forward and apologised for his participation in this act at the IIFA Awards in New Jersey.

ALSO READ: Karan and Kangana ‘Nepotism-War’ gets ugly at IIFA

All three received flak with people calling their act “disappointing”, especially because this year many spoke about empowerment of women and equality.

Varun tweeted post the criticism, “I express my apology and regret… I am extremely sorry if I have offended or hurt anyone with that act.”

Performing at #NewYorkCity iifa was an amazing experience. Inspired and humbled and sorry if I let anyone down. ❤️ #onelove

I express my apology and regret .. I am extremely sorry if I have offended or hurt anyone with that act..

Karan and Saif, who were hosting the award show, revisited the much-talked about nepotism issue that started when actress Kangana Ranaut branded Karan as a “flagbearer of nepotism” and “intolerant of outsiders” on his chat show “Koffee With Karan”.

After the incident, a string of criticism followed over Twitter, describing what the personalities said as crass and joking about Kangana in her absence as highly unfair.

Obnoxious ‘nepotism rocks’ comment by @Varun_dvn & @karanjohar at #IIFA2017 proves, in fact, that nepotism is alive & kicking in B town.

Three men up against one woman!!!😶clearly that woman was able to kick some balls😊😊nepotism sucks. Nothing to be Proud of

Guess, you can always count on privileged men to attack a woman who dares speak her mind.