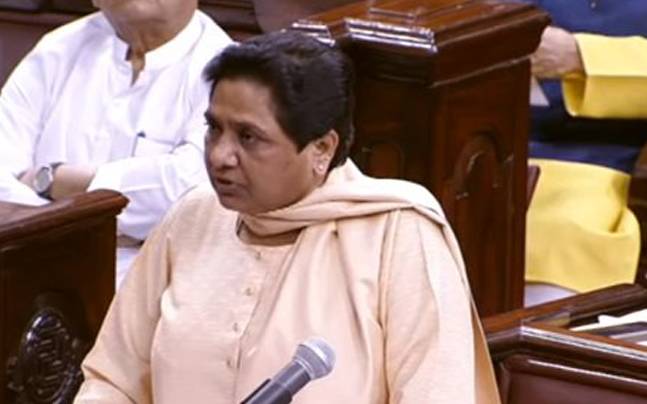 After earlier threatening to resign from the Upper House as she was not allowed to speak on Dalits and other weaker sections being targeted in Uttar Pradesh, Bahujan Samaj Party (BSP) chief Mayawati resigned as Rajya Sabha MP on Tuesday

“I was not allowed to speak on problems being faced by the Dalits, backward class, weaker sections including farmers and labourers in Uttar Pradesh. Since I was not allowed by the ruling party to raise these issues so, I have decided to give resignation from Rajya Sabha,” she told media.

After the first day of the Monsoon session passed engaged over the voting for the next President, the united opposition is all set to raise the heat on the government over issues like lynching incidents and vigilantism, the Kashmir situation and the border stand-off with China.

The session, which will continue till August 11, is also likely to witness heated debates on other key issues like the fallout of the GST, the agrarian crisis and the policy towards Pakistan. Some parties are likely to raise the issue of notification on the ban on cow slaughter and demand an explanation from the government on it.

ALSO READ: Parents, residents up in arms as Govt allows Liquor shop opposite the Shriram School

The first day of the Monsoon session witnessed the Presidential affairs. Both the Lok Sabha and Rajya Sabha were adjourned after obituary references and oath taking of new lawmakers on Monday.

Top Congress leaders met under the chairmanship of Sonia Gandhi on Monday and deliberated on their strategy to raise issues of lynching incidents and vigilantism, the Kashmir situation and the border standoff with China.

11:25 am: Congress leader Ghulam Nabi Azad, in Rajya Sabha, alleged that the ruling government is stifling the voice of the opposition. He further added that the government has failed to help the farmers. He also raised the issue of violence against Dalit community. CPI(M) General Secretary Sitaram Yechury also spoke against the atrocities against Dalits and minorities at Rajya Sabha before the session was adjourned.

11:18 am: Congress and CPI leaders raised the issue of farmers in the country, while BJP leaders continued their protest in Rajya Sabha, demanding an apology from Mayawati. Opposition leaders started raising slogans against the ruling government over farmer’s rights following which the speaker adjourned the session.

11:10 am: Speaking in the Rajya Sabha, BSP supremo Mayawati claimed that there was a rise in atrocities against Dalits. On Sahranpur riots, Mayawati alleged that BJP is spreading communalism. The former UP CM also threatened that she will resign if she was not allowed to finish her statement after the Speaker asked her to sit down. A ruckus broke out in the House as BJP leaders asked Mayawati to apologise for issuing “threats” in the parliament.

11:05 am: Lok Sabha session has been adjourned till 12 pm after ruckus in the parliament

11:00 am: Proceedings begins in Lok Sabha and Rajya Sabha.

10:40 am: Karnataka BJP MP Shobha Karan, outside the parliament on the second day of the Monsoon session, said the state government is not serious about political killings. “Why was IPS D Roopa transferred abruptly,” the MP added.

10:23 am: Opposition Vice-Presidential candidate Goplakrishna Gandhi, before filing his nomination papers, spoke to media and said that he feels a sense of responsibility. Speaking to news agency ANI, the former West Bengal governor said, “I have accepted the invitation with a sense of gratitude and responsibility. He added: “Opposition in India is a very large entity & 18 parties have asked me to be their vice -president candidate.”

10:10 am: Adjournment motion notice was given by RJD leader JP Yadav in Lok Sabha against ‘harassment of opposition leaders including Lalu Prasad Yadav,” said.

10:05 am: A day after Karnataka IPS officer D Roopa was transferred to the traffic department, Karnataka BJP leaders launched a protest outside the parliament. Roopa, a few days ago, had alleged that AIDAMK general secretary V K Sasikala, who is serving time in Parappana Agrahara central prison after conviction in disproportionate assets case, was being given VIP treatment inside the prison.

9:10 am: Congress moves adjournment motion notice in Lok Sabha on the issue of farmers’ plight.

9:00 am: Opposition leaders’ meeting scheduled to take place at 10 am in the Parliament today.