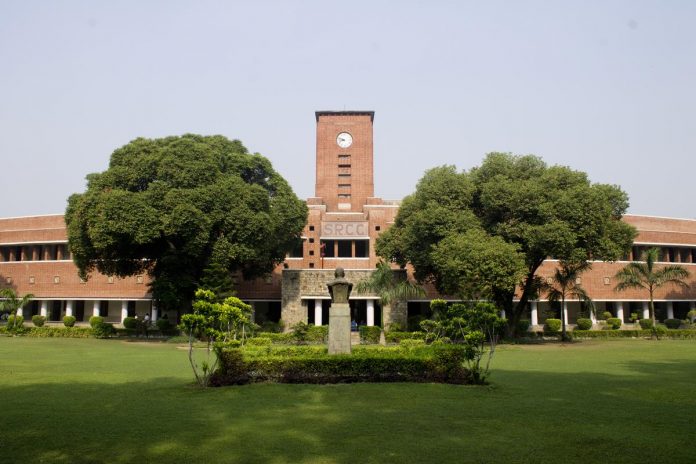 Delhi Police has lodged an FIR against a student of the prestigious Shi Ram College of Commerce for allegedly assaulting a teacher. This incident occurred at the college parking because the student was given a zero in his internal assessment, thus “ruining his future”.

The principal of the college R P Rustagi claims the reason for this zero was lack of attendance in college; however, the student claims it was discrimination because he was a politically active member of the Akhil Bharatiya Vidyarthi Parishad (ABVP). ABVP state secretary Bharat Khatana, however, maintained that Phogat did not belong to the organisation.

Phogat, the student is currently pursuing a Post Graduate Diploma in Global Business Operations (GBO) from SRCC, He was also the Union Sports secretary of Delhi University Students’ Union (DUSU). He completed his LLB from DU’s law faculty.

“The student assaulted Ashwani Kumar in the parking lot around 5 pm. He slapped him a couple of times but Kumar was able to defend himself. He also hurled abuses at him, and then ran away. After that, some of us went to the Maurice Nagar police station and submitted a complaint on the basis of which an FIR was registered,” said Rustagi, who also teaches the GBO course.

“He does not attend classes, and therefore all his teachers have given him zero in his internal assessment. Last semester, he had failed in all his exams, and this semester he didn’t even sit for the examinations. What can a teacher do? He probably thought he could threaten teachers and have his way, but things don’t work that way. He had earlier also called and threatened Ashwani Kumar on the phone regarding the same,” he added according to reports. The victim of this assault, Kumar could not be reached.

Phogat claimed that, “Ashwani Sir has had a problem with me since last year when I participated in the college elections. He holds a grudge against me since I’m from Law Faculty and from ABVP. He doesn’t want students to be politically active. He gave me zero in my internals, and also asked all other teachers do the same.”

“My attendance was normal, but he stopped my admit card this year. I was simply speaking to Ashwani Sir on Friday, pleading with him to not ruin my future. But he said ‘main tujhe pass nahi hone dunga’. Phir maine unhe dhakka de diya, teen thapad maare aur pet me ek laath maari. He left me with no other option,” said Phogat.