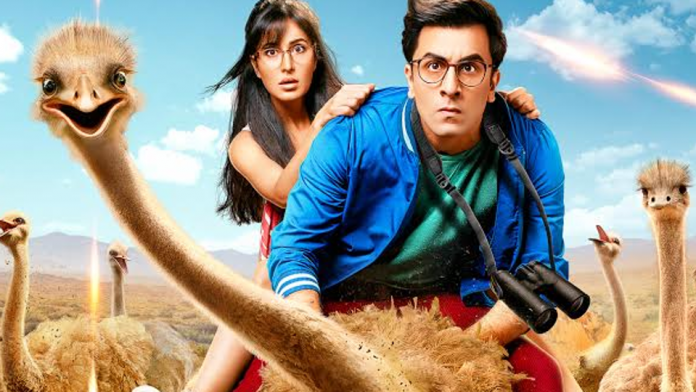 It could more aptly be described as a musical comical thriller straight out of a comic book.

The movie starts bang on a musical note with the introduction of the story and characters through lyrics. Amitabh Bhattacharya and Nilesh Misra have done a hell of a job and pulled off this tough one very well.

Another thing that hits one pleasantly is the beauty of the frames and the sets which seem straight out of a story book..beautiful, colourful, picturesque.(Credited to art direction by Parijat Poddar and cinematography by Ravi Varman)

While the visuals completely floor you, the emotional connect that Anurag Basu is able to create with his characters is also immediate. The bonding which the stammering quiet child finds in his father strikes a soft chord in the heart.
Jagga’s child avatar is very adorable and the child actor does a good job.

But I must confess here that it does take a bit of time and patience to get adjusted to the musical format of all dialogues and we wonder if this will run through the entire film. We get to know that our hero has a stammer which can be overcome only by singing out dialogues and so we settled down mentally with the facts.
The pace is very sluggish, to begin with, and the format of the story is in the form of episodes.
But the whole feel brought together by the frames, music and chaptered way of story telling keeps us going.

By the second half, the episodical introductions are complete and the story picks up the pace as a thriller with the hero sleuthing around for his lost father. And then begins the adventure which is interesting but illogical. But then we have realized by now that we are in a dreamland kind of adventure which is not to be taken seriously. And in fact, it’s enjoyable as a glorified animated story minus the realism.

Ranbir, the seasoned actor that he is, pulls it off well( though we get a
” seen it before” feel).Saswata Chatterjee as his father and Saurav Shukla in another support role have done a good job. Katrina has been intelligently used in the story I must say, with an apt role that required just her cutesy charm.

Manipur and Morocco have been used as beautiful backdrops to the story further embellished by the amazing photography.
But towards the end, some of the visual effects seemed so amateurish that I think the director got serious about giving it a comical feel at certain points.

I think this film would appeal to the kids in a big way and especially the ones who love those adventure or sleuth stories.. and I wonder why wasn’t it marketed that way.

Finally, Anurag Basu definitely deserves accolades for this completely experimental format which is definitely a first in Bollywood. With his creative imagination, he manages to create a complete fantastical adventure straight out of a story book.