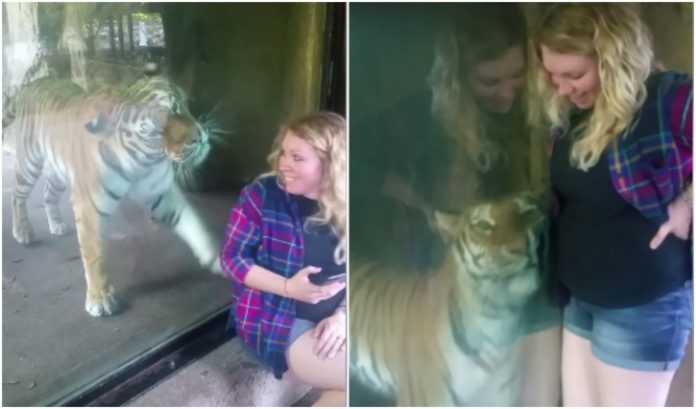 In a recent video thats gone viral, a tiger can be seen snuggling upto a pregnant woman’s stomach.

Tigers are predators feared by man and beast, so this scene came as a shock to many, thus taking the internet by storm.

The video was posted to Facebook by Brittany Osborne after visiting Indiana’s Potawatomi Zoo with her pregnant cousin, Natasha Handshoe.

Brittany wrote, “We went to the Wine on the Wild Side occasion and this huge tiger realized that my cousin Natasha Handshoe was pregnant! The tiger was cuddling her belly! It was the SWEETEST (sic) minute.” In the same video, someone can also be heard exclaiming, “I don’t know whether to chuckle or be frightened. That is so insane.”

Ms. Handshoe told various online media that the tigers were sleeping in the back and when she returned to the exhibit to take a selfie, this tiger started pawing the glass. “I do believe the tiger knew I was pregnant just by the way it was acting,” she says.

We went to the Wine on the Wild Side event and this beautiful tiger knew that my cousin Natasha Handshoe was pregnant! The tiger was snuggling with her baby bump! It was the SWEETEST moment!

The zoo also shared the incredible video with the comment, “This is why the Zoo is here – to help make connections to nature! Thanks for sharing this amazing video with one of our tiger sisters, Morgana.”