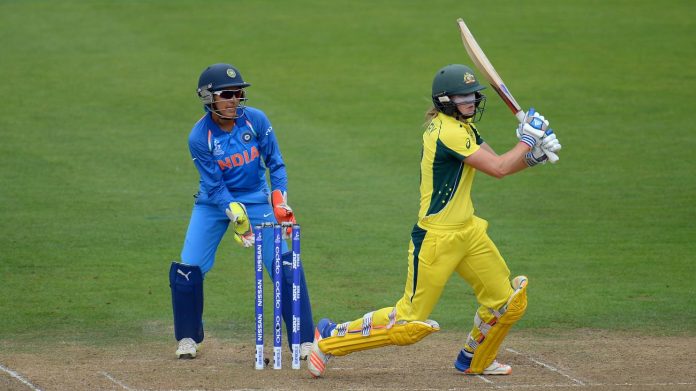 Australia on Wednesday defeated India by eight wickets in the ICC Women’s World Cup league match in England to reach the semi-finals.

India suffered an initial setback when Gardner sent opener Smriti Mandhana to the pavilion in the fourth over with only nine runs on the board. The other opener, Punam Raut scored an impressive century and made 106 runs in 136 balls with 11 boundaries. Raut and skipper Mithali Raj built a second-wicket partnership of 157 runs.

Mithali was caught and bowled by Kristen Beams in the 41st over, scoring 69 runs in 114 deliveries. India’s third wicket fell in the 47th over when Ellyse Perry took Raut’s wicket. Harmanpreet Kaur was attempted to carry forward India’s batting effort but lost her wicket after scoring 23 runs.

Megan Schutt and Ellyse Perry took two wickets each. Perry was the most economical bowler who gave away only 37 runs in 10 overs.

The Aussie openers Nicole Bolton and Beth Mooney gave Australia an impressive start and scored 62 runs for the first wicket partnership. Bolton was the first to depart in the 16th over, having scored 36 runs in 48 balls before falling victim to Poonam Yadav. Mooney was run out in the 23rd over, scoring 45 runs in 68 balls.

Aussie captain Meg Lanning and all rounder Ellyse Perry stood firm against the Indian bowling attack. The pair successfully chased the target of 227 runs in 45.1 overs. Lanning and Perry remained not out on 76 and 60 respectively. It was Perry’s fourth successive fifty.

India will now have to beat New Zealand in their final group game on Sunday to make it through to the semi-final. The match also saw Indian captain Mithali Raj reach a new milestone by becoming the highest run scorer in the ODI format.