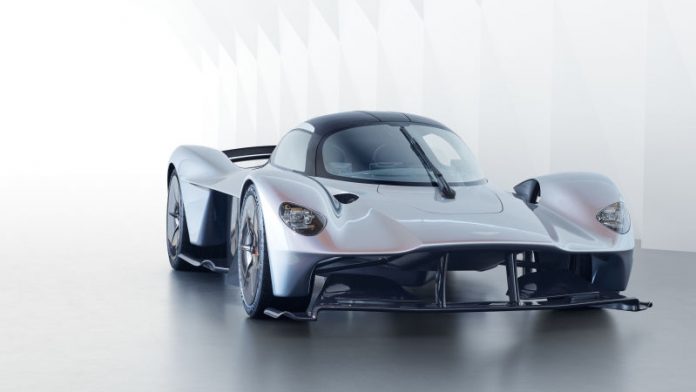 Aston Martin‘s latest effort to build the next headline-grabbing hypercar has gathered new momentum with new details of the interior and the exterior being revealed by the manufacturer itself. The Aston Martin Valkyrie is the joint collaboration between the British sports car manufacturer and Red Bull Advanced Technologies.

The latest renders released by Aston Martin reveal a sculpted teardrop-shaped cockpit that has been designed to maximize airflow around the car to increase downforce and improve driveability. The sculpted body features openings on the body surface to direct airflow under and around the car to boost aerodynamic function while being aesthetically pleasing at the same time. The exterior of the car has received significant inputs from famed Red Bull engineer, Adrian Newey, who was responsible for designing the championship-winning Red Bull Formula One cars that allowed Sebastian Vettel to win multiple world championships.

In a further bid to improve aerodynamic efficiency, the Valkyrie does away with traditional external rear-view mirrors, being replaced by rear facing cameras on each side that feed two screens within the cockpit.

On the interiors, Aston Martin has brought their experience from building race-engineered sports cars to offer Valkyrie owners with an interior that is purely race-focused. The Valkyrie will feature a reclined ‘feet-up’ position, similar to the driving position prevalent in Formula One and Le Mans prototype racers. Aparts from this, the interiors are extremely minimalistic to reduce distractions for the driver. All the information the driver could need is provided through four displays in the cockpit , one of which is mounted in the steering wheel itself. The steering wheel also houses all the buttons and switches that control various functions of the car as well.

Based on reports from Aston Martin itself, the Valkyrie will be powered by a massive 1,000 hp -plus V12 Cosworth engine with a weight of just over a 1,000 kg, offering a power-to-weight ratio well-above the golden one-to-one ratio of hypercar power figures. Keeping the car on the road will be the aerodynamic magic provided by the car’s surface and the numerous vents and wings on the car, courtesy of Adrian Newey’s design genius.