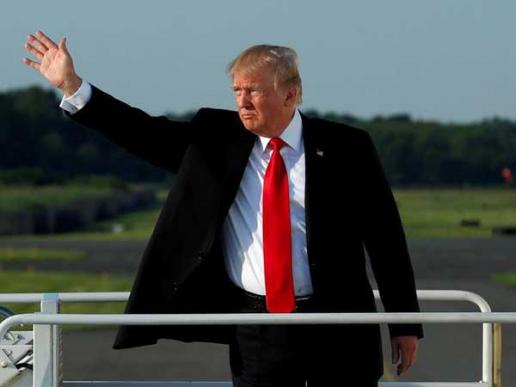 Washington D.C. [United States]: U.S. President Donald Trump’s meeting with his French counterpart Emmanuel Macron this week will focus on Syria and counterterrorism topics, said a White House official.
“Most of the discussion to focus on what’s going on in Syria right now, and then the French and American cooperation both inside the alliance and bilaterally with respect to that, and counterterrorism issues not only in Syria but in other places,” said the official.

Trump will arrive on a two-day visit to France on July 13 to participate in annual Bastille Day celebrations at the invitation of President Macron.

Trump will move to the U.S. Embassy on his arrival to the country on Thursday for a meet-and-greet with embassy staff and also with U.S. participants, who will be in the Bastille Day festivities on Friday.

Following the meet-and-greet, he will have a working lunch with senior members of his delegation and senior U.S. military leaders participating in the ceremonies which include the Chairman of the Joint Chiefs, General Joseph Dunford, the Commander of U.S. European Command and the Supreme Allied Commander Europe, General Mike Scaparrotti and the Army Vice Chief of Staff, General James McConville.

Later in the afternoon, Trump and First Lady will go for a tour of the tomb of Marshal Foch, who was the Supreme Allied Commander at the end of World War I, the French National War Museum, and also the tomb of Napoleon.

The tour will be followed by bilateral meetings with President Macron and his senior advisors.

The meeting will focus on Syria and counterterrorism topics.

“We also anticipate the two Presidents, in the introductory one-on-one meeting, will also share perspectives from the recent G20 meeting,” said the official.

The bilateral discussion will be followed by a joint press conference where President Macron and President Trump will make remarks followed by questions from the media.

Later in the evening, President Macron and French First Lady will host a private dinner for Trump and Melania.

President Trump and Melania on Friday will participate as guests of honor in the annual Bastille Day ceremonies on the Avenue des Champs-Élysees.

This year marks the 100th anniversary of the entry of American troops onto French soil and into World War I.

The U.S. Air Force demonstration team, the Thunderbirds, will participate and conduct a fly-over during the ceremony.

There will also be one U.S. naval aviator who will pilot a French Rafale fighter plane as part of the festivities. Three U.S. veterans of the Normandy invasion will also be present.