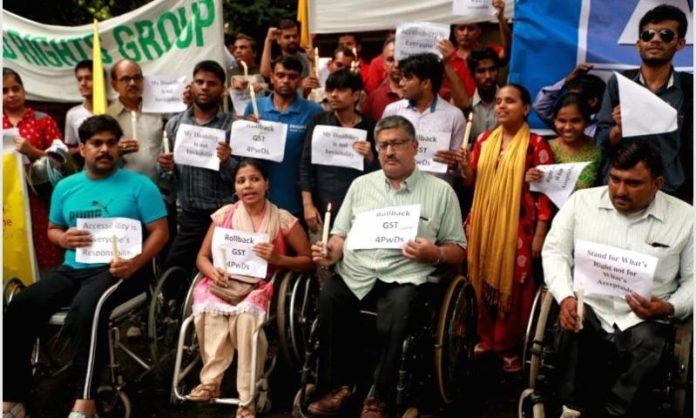 The newly imposed Goods and Services Tax by the NDA government has received major flak from activists and disability organisations. The tools and appliances used by disabled persons were tax free before the GST regime came into force and now have an overall 5% GST imposed on them.

Disability organisations said that the government’s claim of this tax at a concessional rate on them was an “eye wash”. Their announcement that it was a “win-win” situation for all was highly misleading and inaccurate. The GST Council had contended that the compelling reason for imposing the “concessional rate” of 5 per cent was for the domestic manufacturer to claim input tax credit for raw material used to make these products.

“Pre-GST, barring cars for physically handicapped, all disability aids and appliances did not attract any levy,” V Muralidharan from the National Platform for the Rights of the Disabled (NPRD) claimed.

India that is a “welfare state” according to the Constitution appears to be losing its hold over this title. Prior to GST equipment such as carriages, crutches, wheelchair, braille books, typewriters and other equipment were largely immune to any tax. However, now most of these equipments are getting costlier. This is highly problematic because most of India’s disabled community hail from the lower income community.

With the rise of Hindutva in India, is it really a surprise that while basic necessities for the disabled are taxed, items used for ‘puja’ and Hindu religious products are exempt.

Items like Kajal, kumkum, bindi, bangles attract a GST of a mere 0.25 per cent and polished diamonds and gold only 3 per cent, according to reports.

“Diapers used by certain categories of the disabled and the elderly are also taxed at 12 per cent. This, lays bare the priorities of the government,” said a statement issued by disabled organisation which included Delhi Viklang Adhikar Manch, Wheelchair Trust of India, Differently-Abled Welfare Federation, Kerala among others.

Despite receiving major flak from social activists and organisations across India, no revision of rates has been made.

“By keeping it in a very reasonable rate of 5 per cent manufacturer will be able to pay 5 per cent out of input tax credit and the remaining amount will be refunded back to him. So the price of this commodity should come down because of this,” Revenue Secretary Hasmukh Adhia had said in response.

He also claimed that, at zero per cent tax rate, import of wheel chair and other equipment would have come in duty free and domestic production could have stopped completely.

“It needs to be clarified that items like Braille printer, refreshable Braille display and Braille note-taker, talking watches and clocks, audio labelling devices, talking thermometer, talking weighing machine, talking scales, etc. are entirely imported items and did not attract any taxes earlier,” said the statement by the disability organisations.

As for taxes on domestically manufactured items, raw materials like aluminium extrusions, square tubes and round tubes of aluminium used in the manufacture of artificial limbs or many rehabilitation aids were earlier exempt from tax. Many of these inputs would now be taxed at 18%.

The underprivileged disabled community is going to suffer even more post the GST, while the leaders of India knowingly turn their face away.

Here’s a list of items which will now attract 5 per cent GST: