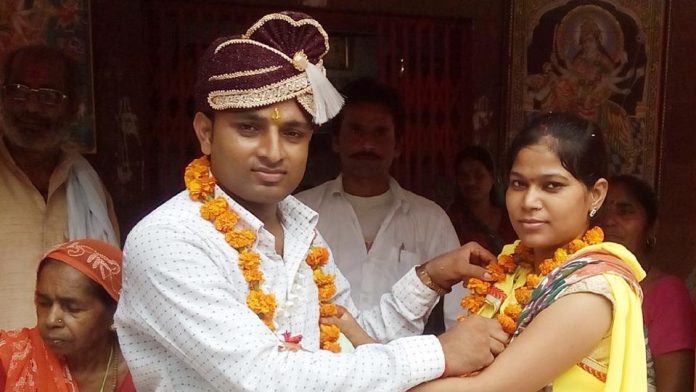 Varsha Sahu came into the spotlight when she arrived in her lover’s wedding and vandalised the wedding pandal, kidnapped her lover when he was getting married to some other woman in Maudaha in Bundelkhand on May 15.

Taking her love story to the next level she got married to her lover, Ashok Yadav on Sunday at the Mata Chaura temple in Hamirpur. “I am ecstatic. I had to struggle a lot to make this day happen,” said a happy Varsha. “First, I had to kidnap Ashok from his wedding and then I had to ensure his release from the Hamirpur district jail,” she added.

Ashok came out of the jail on July 7 after he was granted bail in a case of cheating the family of the girl he was marrying in Bhavani village had filed. Varsha was outside the jail to receive him and they left together announcing they would marry soon.

To our surprise, the local unit of the Shiv Sena did all the work and made the arrangement for the food that was served to the guests and the wedding. In fact, Shiv Sena state president Ratan Brahmachari announced the launch of an NGO that would support girls ditched by their lovers.

“We have named the NGO as ‘Revolver Rani’ and it will be headed by Varsha. It will help girls like her in reuniting with their lovers,” said Brahmachari.

Earlier when Varsha kidnapped Ashok she kept the revolver on his head, leaving no option but to go with her, later it emerged that the duo were in a live-in relationship for eight years. After vandalizing the whole marriage, the father of the girl with whom he was going to get married registered a case against him for cheating with the family.