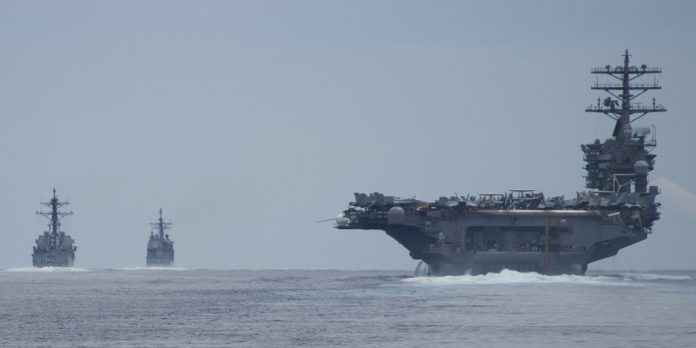 The naval exercise mentioned during the joint statement of Prime Minister Modi and US President a few weeks ago have begun on Monday. The joint naval exercises, known as Malabar 2017, will include the Indian, American and Japanese navies and will be conducted in the Bay of Bengal.

Malabar 2017 will see participation of the frontline warships, submarines and aircrafts from all three nations. The exercises will focus on anti-submarine warfare and are being positioned against China’s increasing presence in the Indian Ocean, especially with submarines. The exercises will feature on shore and at-sea training exercises.

Anti-submarine aircrafts P8-I of India and the American P-8A Poseidon will be participating in joint air missions while India’s INS Vikramaditya aircraft carrier and the American USS Nimitz aircraft carrier along with Japan’s JS Izumo helicopter carrier will be working together for the duration of the exercises. Apart from the frontline carriers, the Indian and US navies will also field cruisers, frigates and destroyers during the exercises.

The Indian Navy will be represented by two Kamorta class anti-submarine warfare corvettes, two Shivalik class frigates, two destroyers and a Kora class guided missile corvette. The US Navy will field the USS Princeton guided missile cruiser and three destroyers while the Japanese Navy will also bring a destroyer, JS Sazanami for the naval exercises.

The Malabar 2017 exercises have been designed to increase military-to-military cooperation and the capacity to plan and execute tactical operations in a multinational environment.

In response to the joint naval exercises in the Bay of Bengal, the Chinese government expressed that it had “no objection to bilateral relations and cooperation between relevant countries” but “hoped that these relations relations would not be directed towards any third country.”