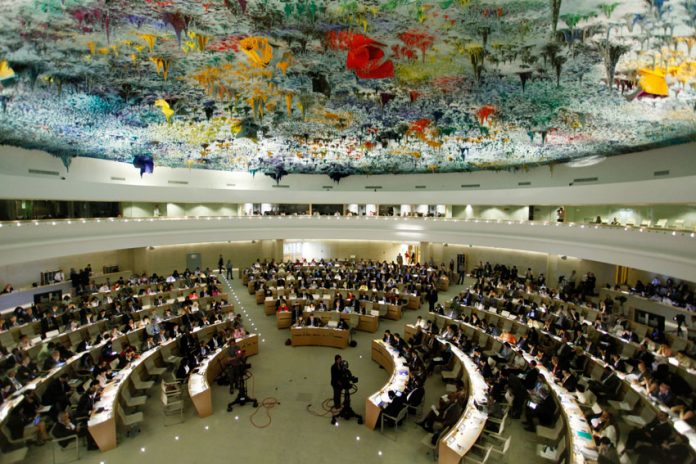 Alarmed over reports of the deteriorating human rights situation across Pakistan, and particularly in the country’s Sindh Province, the United Nations Human Rights Council has said that it will undertake a thorough two-day review of Islamabad’s human rights record on July 10 and 11.

In a letter to Dr. Rubina Greenwood, President of World Sindhi Congress (WSC), Christine Chung, Human Rights Officer, Asia-Pacific Section Field Operations and Technical Cooperation Division, Office of the High Commissioner for Human Rights, said, “The human rights situation in Sindh province that you have outlined is of serious concern. I encourage you to submit information about specific cases to the Special Procedures.”

The letter also drew Dr. Greenwood’s attention to the Universal Periodic Review and the human rights treaty bodies, additional human rights mechanisms which she might wish to consider.

Chung said, “For example on July 10 and 11, Pakistan will be reviewed by the Human Rights Committee for its implementation of the International Covenant for Civil and Political Rights. The Committee will issue concluding observations based on the constructive dialogue and various documents that were submitted by the State as well as Stakeholders.”

She added that these recommendations may help Dr. Greenwood in her advocacy for delivering human rights to the people of Sindh.

ALSO READ: PoK locals protest against Pakistan PM, Army for turning their land into a terror…

Sindhi, Baloch, Gilgit-Baltistan, Pakistani administered Kashmir activists and human rights defenders of other nations participated in the protest, chanted slogans against the atrocities committed by the security agencies of Pakistan and holding banners against the enforced disappearances of Sindhi political activists.

Petitions were submitted to UN Secretary General and the UN High Commissioner for Human Rights.

Earlier, the WSC passed a resolution in which it called on Pakistan to end all acts of exploitation against indigenous Sindhi and other minorities.

Highlighting the abysmal human rights situation in Sindh and Balochistan before the media in Edinburgh, Scotland, WSC Representative Gul Sanai accused Pakistani agencies of perpetrating a campaign of enforced disappearances, systematic violence and marginalization of indigenous Sindhi minorities, especially Hindus and Ahmaddiyas, etc., who were living peacefully in Sindh and in other parts of Pakistan.

He also drew attention to the mushrooming of religious seminaries, which were more than 20,000 in number in Sindh alone. The resolution said that religious extremism and extreme fundamentalism in Pakistan was being funded by foreign money. Sindh and other areas of Pakistan were also suffering from perpetual poverty, non-employment, poor standards of education and other social injustices.

The resolution said “All these factors impact on human development which was at rock bottom..Pakistan must stop attacking and killing Sindhi nationals and other political activists; conduct judicial inquiries into incidents of extra-judicial killings; declare the names of missing and illegally detained people, and or produce them before a court of law if they are accused.”

Sanai called on Pakistan to immediately stop exploiting the resources of Sindh and put in place a “policy of fair and equitable distribution of resources as well as policies to discourage internal displacement of people or alter the demographical majority status of the Sindhis in their homeland.”

The resolution urged the international community to recognize and resolve the right of and to self-determination of Sindhis and “all constituent nations” of Pakistan.

In March this year, the World Sindhi Congress hosted a conference titled ‘Erosion of Sindhi Culture in Pakistan’ at the United Nations Human Rights Council headquarters in Geneva.

Dr. Greenwood opened the conference with reference to the February 2017 terrorist attack by Islamic fundamentalist forces on the Sufi shrine of Lal Shahbaz Qalandar at Sehwan in Sindh province.

She stated that the attack on the shrine, which killed at least 80 people, was a severe blow to Sindhi culture that prided itself for its secular and tolerant heritage.

She charged Pakistan of systematically eradicating Sindhis, who were once in a majority in the province of Sindh but now constituted a mere six to eight percent of the total population.