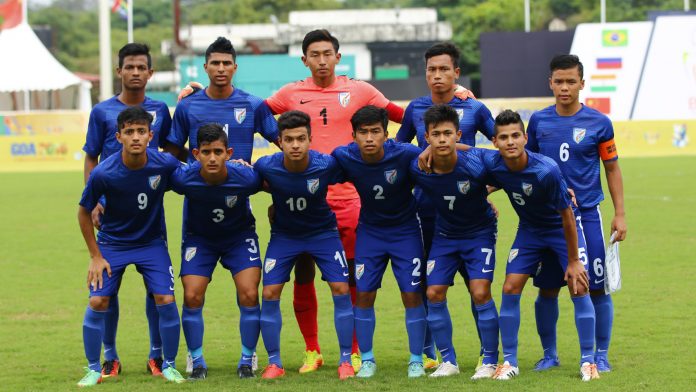 ShareTweetGoogleWhatsappPrint
Mail
The Under-17 FIFA World Cup will begin in less than a 100 days, and this time it is going to be a real special occasion for Indian Football to mark their presence on a global scale, if only the Indian people chose to take responsibility for it.

The Cricket-frenzy nation has seen a rise of other not-so-popular sports in recent years, like Badminton, Tennis, Hockey, Kabaddi, Wrestling, Table-Tennis and Football as well. All these sports have seen a rise in fan-following and viewership, a must for any sport to establish its ground in India.

Although all these sports have gathered the fame in privatised league structure which primarily aims at making money, but the emergence of few sports superstars on an International stage like Kidambi Srikant, PV Sindhu, Saina Nehwal(Badminton), Sania Mirza, Rohan Bopanna(Tennis) to name a few, has provided a ray of hope for a better future of Sports in India, apart from Cricket. Still, Indian Football is yet to receive its global superstars, in spite of all the ISL hue and cry. Football, being a much competitive and global sport, makes it extremely difficult for a team (or player) to make a mark on the international stage. For this reason alone, the FIFA U-17 World Cup should be of extreme importance for every Indian Football lover, who is fed up of supporting the European and South-American teams and players.

We asked Football expert and Senior Sports Journalist, Novy Kapadia about India’s preparation and expectations in U-17 World Cup and he had some interesting views to share.

On India’s chances, he was obviously not very optimistic and said “It will be a great achievement if they go through the group stage. We only made it to the World Cup because we are the hosts otherwise we have never even come remotely near to qualifying in such global football events. Going through the group stage will also be a matter of luck. If we get teams like New Caledonia or Niger in the draw, we might have a good chance. India being the host will be put in the draw with top-seeded teams. We know that FIFA draws are done very scientifically and unlike Cricket where groups are planned, keeping in mind the team rivalries such as India-Pakistan, Australia-England etc. which result in more money for the organizers. If India ends up with teams like Germany and Spain in group stages it is going to be almost impossible to get past to the next level. Entry in round-of-16 will be like reaching the World Cup Final.”

It is the time we claim our space on the global platform with our first generation of global Footballers. I am not being delusional here and thus not expecting an all-out Bollywood style WC victory, but just asking the Football lovers to know about and support our boys in the U-17 World Cup, regardless of their win or loss record. Then only will it be a victory for Indian Football. We cannot let them pass into the abyss as soon as this World Cup ends. They should be nurtured with a much larger vision, ie the FIFA World Cup qualification.

Novy Kapadia said, “this is the first time World Cup is being held in India and it is a historic achievement for the players being a part of the first Indian team to play a FIFA World Cup on Indian soil. It can inspire a lot of other budding players.”

Recently, Group A (ie. India’s Group) matches were shifted to Delhi and Group B teams will play their games in Navi Mumbai. While this is seen as a move to encourage players by bringing in more support for them and increasing ticket sales, but on this development, Novy Kapadia said, “a lot depends on how this tournament is being organised. Till now, the ticket sales are very poor. It is expected to increase in the coming days as people in Delhi mostly buy tickets at the last minute. But, I also believe this has been done to create a photo-op for the political class, as no such thing is ever done to uplift players’ mindsets. In fact, players’ interests are the last thing the football management in India takes into consideration. From the business end as well, Delhi can never match the popularity of football in Kolkata and might end up with empty seats on match days.”

The draw for the FIFA U-17 World Cup is scheduled to take place on Friday, July 7 at 7 PM IST at Hotel Sahara Star, Mumbai.

The Indian U-17 team has been touring Europe and Middle-East to gain some exposure from past several months with mixed results. Nicolai Adam the ex-coach was released of duty just eight months before the World Cup and was replaced by Luis Norton de Matos. “I frankly believe removing the coach (Nicolai Adam) was quite unnecessary. Coaching level for the U-17 has to be really strict, and it was poorly handled by the AIFF. There is much more than meets the eye, there were some internal problems between the training staff and it had nothing to do with the players. No country removes a coach just eight months prior to the World Cup and especially a country like India which doesn’t stand anywhere on the global stage. Nicolai Adam is a hard working German national and he brought the much needed German mentality to the Indian side and replacing him with Matos was foolish. You cannot fool around like that in a World Cup like this.

From the players’ point of view, I think the exposure could not have been better. AIFF has brought in a lot of funds to support these tours. There could not be a better exposure for new budding footballers than to play in Europe and Mexico(next planned tour). Training camps, practice matches and off-the-field exposure is very good and I can’t falter AIFF in this regard.” The AIFF has spent more than ₹ 10 Crores since early 2015 in organising ‘exposure’ trips abroad for the development of the squad. During the Nicolai Adam era, the team travelled to Germany, winning 8 of 14 games before the 2015 U-16 SAFF Championship, where they lost to hosts Bangladesh in the final.

Interestingly, under the new coach Luis Norton de Matos, the team has some positive results in recent past. The team touched down in New Delhi on 1st July after a gruelling European campaign, remaining unbeaten in their last nine games before the final game defeat to Alcorcon U-17.