Home World Everybody knows Russia meddled in US elections: Haley 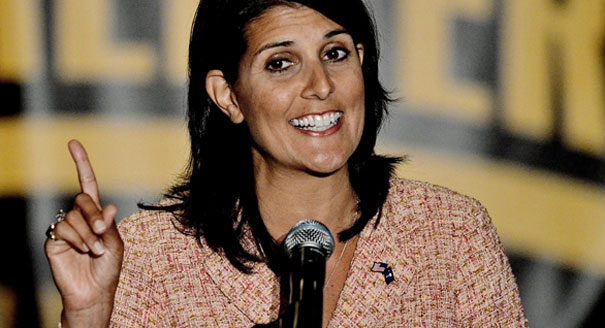 After Russian President Vladimir Putin denied interfering in the 2016 U.S. election, U.S. Ambassador to the United Nations, Nikki Haley said that the former made the statement just to “save his face.”

“This is Russia trying to save face, and they can’t,” said Haley in an interview, as quoted by the CNN.

Talking about the recent meeting of both the leaders of the U.S. and Russia at the sideline of the G-20 summit, Haley said the US President, Donald Trump wanted to look Putin “in the eye.”

“What he did was bring up right away the election meddling, and he did that for a reason,” Haley said.

“One, he wanted Putin to basically look him in the eye, let him know that, ‘Yes, we know you meddled in our elections. Yes we know you did it. Cut it out.’ And I think President Putin did exactly what we thought he would do, which is deny it,” she added.

Earlier, Putin has said that Trump “seemed satisfied” with his personal denial of meddling in the 2016 election.

Putin, in his first interview after meeting Trump, revealed that the latter asked him a number of questions regarding Russia’s interference, reported the Independent.

Further, stressing on the same, Putin said that it would be better to take Trump’s opinion as to whether or not he believed his denial.

“He asked questions, I replied. It seemed to me that he was satisfied with the answers,” Putin said.

Putin’s remark came after the diplomats of the U.S. and Russia argued over what both the leaders actually said to each other during their bilateral meet at the sideline of the G-20 summit.

At first, Russian Foreign Minister, Sergey Lavrov claimed that Trump accepted Putin’s assurances that Russia was no way involved in the 2016 American election.

Meanwhile, according to the U.S. Secretary of State, Rex Tillerson, the U.S. President opened the session by “raising the concerns of the American people regarding Russian interference in the 2016 election.”

As per reports, Russia asked U.S. to support their claim regarding its involvement in the election, which the U.S. did not produce in the meeting.

As per Tillerson, both the leaders had a lengthy exchange on the subject.

Meanwhile, Lavrov, speaking on camera in a separate briefing, said that, “President Trump said he’s heard Putin’s very clear statements that this is not true and that the Russian government didn’t interfere in the elections and that he accepts these statements. That’s all.”