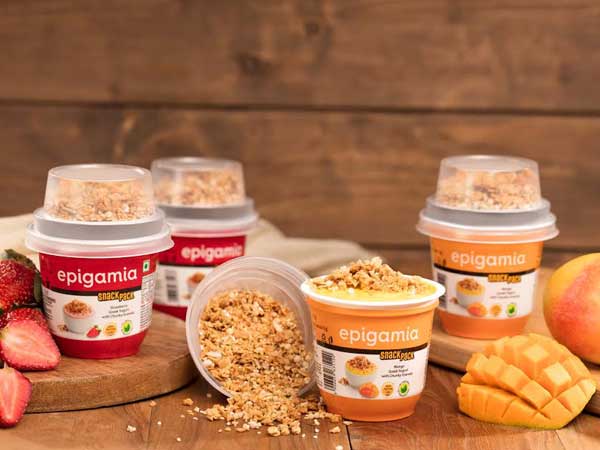 The company plans to innovate and launch new flavors, initiate brand-building activities and increase production capacity through the new capital.

“We have been able to see firsthand why their global track record is so successful! Partnering again in this round was a no brainer and with their support we plan to continue expanding our product lines, categories, and geographies. With the recent additions to our leadership, including Siddarth Menon, Francis Vidhayathil and Dharmesh Joshi, the missing pieces to our dream team are now in place and the sky is the limit for this amazing team I am proud to be a part of,” said co-founder and CEO Drums Food International, Rohan Mirchandani.

Epigamia is India’s first branded and leading premium Greek yogurt which has rapidly gained traction with the Indian consumer. Made with all-natural ingredients and no preservatives, Epigamia is popular across a wide consumer demographic, positioning it as the snack of choice for India’s health-conscious millennials.

Since raising its Series A round last year from Verlinvest and DSGCP, the company has expanded distribution by over five times and launched the Epigamia Snack Pack, the first of its kind in Asia combining dry snacks to be mixed with Greek yogurt through innovative packaging.

“We are very happy with our fantastic partnership with Epigamia and Rohan. We believe there is great growth potential to offer premium dairy products to Indian consumers and Epigamia addresses this with a compelling proposition. Verlinvest prides itself on being a daring investor in the consumer world and enabling entrepreneurs through inspiring journeys. Epigamia fits well within this vision,” said Executive Director Verlinvest, Nicholas Cator.

“DSGCP is pleased to continue our relationship with Rohan and the amazing team at Epigamia with this new round of investment. Along with our partners Verlinvest, we have seen the team launch India’s first Greek yogurt and more recently, the first yogurt snack pack a few months ago. Core to Epigamia’s success is its unrelenting focus on innovation and always delighting the customer. With this new round of funding, we will see exciting new products coming to the market focused on healthy and functional benefits. Indian consumers are increasingly looking for exciting new products that taste delicious,” said MD, DSG Consumer Partners, Deepak Shahdadpuri.

The company also announced that Arjun Anand, from Verlinvest’s Singapore office, and Prashant Chhaya, former Executive Director at Cadbury (Mondelez International), will join the Company’s Board of Directors.

“We are happy to continue to back a talented team that has set out to build the leading premium dairy brand in India. Greek yogurt has great health and wellness benefits and we believe that Greek yogurt and premium dairy in general will become large categories in India. This increased investment in Epigamia alongside DSGCP fits well within our partnership to be a long-term supporter of young brands and talented entrepreneurs in growing categories in India. Rohan has put together a great Board of Directors with talent across strategic areas and I look forward to joining them soon,” said Arjun Anand.

“The value added dairy market in India is predicted to grow at double digit rate over the next few years. With rising popularity of probiotic products, superior offering, higher level of brand recall and awareness and increased market penetration, Epigamia is well placed to lead the Greek yogurt market in India,” said Prashant Chhaya

The company is positioned to become a formidable FMCG player in the fast emerging “GLocal” space -global quality and locally made in India.