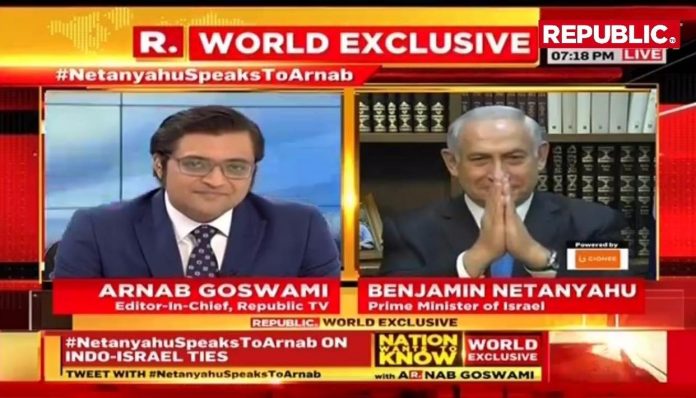 After Prime Minister Modi‘s successful Israel visit, Israel’s Prime Minister Benjamin Netanyahu spoke to Republic TV’s Editor-in-Chief Arnab Goswami. PM Netanyahu took a firm stand on terrorism and said that “terrorism recognises no limits; has a great thirst for violence”. Israel and India signed a series of agreements as well to cooperate in the fields of technology, water and agriculture.

Cognizant of the threat those people face from terrorism and the countries that espouse it, Netanyahu said that it is the responsibility of each country to ensure that its territory isn’t used as a launchpad to spread terror in other nations.

Speaking on the historic visit of PM Modi to Israel, the first by an Indian Prime Minister, Netanyahu said that as a son of a historian, he was fully aware of just how significant the event was. Tracing the path of the two civilisations back several millennia, Netanyahu said “with a clinical mind and enthusiastic heart” that it was more than just a meeting of two heads-of-state; rather a meeting of the people of the two nations.

“Any country that harbours prospective and actual murderers should bring them to justice.”

He said that Israel was committed to fighting terrorism, which he remarked, is an international problem and requires an international solution. Remembering the events of 26/11, he said that he and PM Modi had agreed to fight terror with their full might. That there is now an anti-terror plan in place could be ascertained from the fact that Netanyahu refrained, in as many words, from elaborating on how India and Israel plan to combat terror apart from mentioning intelligence sharing.

“Don’t harbour, dispatch, tolerate terrorism because that scorpion will turn back and bite you”

Netanyahu said that India and Israel are the two Democratic bookends of a region that is faced by a rash of radical Islamic terror that threatens both Muslims and non-Muslims that the perpetrators regard as ‘infidels’. He did add, however, that a number of countries, including in the Middle-east, understand that they are threatened and that ‘we are in a battle’. New relations and alliances are coming about as a result of this, he added.

“Radical Islamic terror is the biggest threat to the world order and if it takes over nations, or groups manage to develop weapons of mass destruction, it will be a grave threat. We have to do whatever we can to roll it back.”

The Israel Prime Minister went further to equate terrorism to a ‘malignancy interstitched between East and West that threatens the world order; recognises no limits; has a great thirst for violence’; and doesn’t see the future the same was as PM Modi and himself.

“They want to take the world back to medieval barbarism. But I have great faith that modernity will win”

Netanyahu was clear about the potential of India and Israel’s partnership, noting that there was a lot of lost time to make up on. He said that the two countries are natural allies and democracies, and must ask themselves how they didn’t cooperate earlier in combatting terror as well as on other fronts.

“Cooperation on Agriculture, water, space, health — everything is susceptible to innovation.”

He went on to answer his own question about the long delay in India and Israel reaching out to one another, attributing it to a ‘matter of leaders’. Calling Prime Minister Narendra Modi a ‘real leader’, Netanyahu said that he was impressed with his enthusiasm to fight terror and encourage technology.

“PM Modi said to me, ‘Life is innovation'”

On the sensitive nature of the current relationship between India and China, Netanyahu reassured that there would be no conflict between Israel’s ties to each country. He instead launched into effusive praise for India saying that Israel believes India to be a great power with great potential that was being realised by the “very bold” reforms PM Modi is putting forward.

Regardless of the difficulty, however, Netanyahu vouched for the progress that can be achieved when talented citizens and enterprising geniuses are introduced into a working system.

“We love India. We admire India. We believe in India. And we want this partnership with India.”

Speaking about how this partnership can benefit India, Netanyahu cited his and PM Modi’s visit to a greenhouse where he demonstrated how using drones and satellites, it was possible to deliver nutrients and water to each individual crop. He also mentioned “computerised cows”, which he claimed, produce twice as much milk as European cows.

“Why shouldn’t Indian farmers enjoy this?”, he asked, adding that PM Modi agreed with him.

Netanyahu ended the interview on a personal note. Speaking on his own association with India, he remembered how 30 years ago, he had gone on a dinner date with Sara Ben-Artzi who later became his wife and how together, they now have two kids. The setting for their date had been an Indian restaurant and it was the chef of that restaurant that he invited to prepare the dinner he shared with PM Modi at his home the previous night.

“People sense the warmth of partnership and friendship. We have waited 70 years for it. Maybe even 3000 years.”