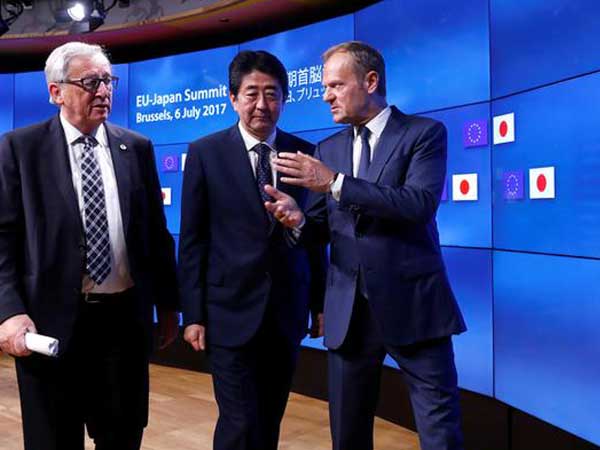 The leaders met in Brussels on Thursday for the 24th Summit between the European Union (EU) and Japan and issued a statement.

“The highly ambitious and comprehensive Economic Partnership Agreement will consolidate our solid and evolving trade and economic partnership and pave the way for the future. It will bring our two economies closer by addressing issues related to market access for goods, services and investment, procurement including railways, as well as those related to non-tariff measures and the protection of geographical indications as well as intellectual property rights,” the statement read.

The accord will allow E.U. and Japan to renew and strengthen their joint commitment to international standards for an even closer cooperation in the future. “At the same time, with this agreement in principle of the Economic Partnership Agreement, Europe and Japan demonstrate to the world – and to our citizens – that free trade, with clear and transparent rules fully respecting and enhancing our values, remains an important tool to promote prosperity in our societies. The EU-Japan Economic Partnership Agreement will constitute the basis for a strategic partnership for free and fair trade, against protectionism,” the agreement said.

ALSO READ: France to end sale of petrol and diesel cars by 2040

The leaders of the EU and Japan met in Brussels to reaffirm the strength of their Strategic Partnership and will demonstrate their resolve to work together for peace, prosperity and a rules-based international order. “We remain united by our common values of democracy and the rule of law and by our determination to promote together an open and fair global economy that benefits everyone. These are the foundations of our political and economic Strategic Partnership for peace, prosperity and a rules-based international order – serving to unite us bilaterally and also to make us stronger internationally.” the accord further said.

“We tasked our respective negotiating teams with a rapid finalisation of the agreement that would allow for the internal procedures to start soon, both in the EU and in Japan.With shared responsibility for achieving peace, stability and prosperity of the world, Japan and the EU also reached agreement in principle of the Strategic Partnership Agreement. This will provide a framework for an even deeper and more strategic EU-Japan cooperation that enables our partnership to grow and to face new types of challenges.At a time where the rules-based international order is under increasing pressure, the Economic Partnership Agreement and the Strategic Partnership Agreement recapture the shared values and common principles that form the foundation of the EU-Japan partnership, including human rights, democracy and the rule of law,” The joint statement of E.U and Japan stated.

The leaders stated that they took the opportunity before attending the G20 Hamburg Summit tomorrow to discuss their cooperation in other important areas, including on their joint efforts to address the global threat of climate change and other international challenges.