"We will change the World together," NaMo and Netanyahu script a new Shalom-Namaste story | Newsmobile
Wednesday, February 1, 2023

Home Home Slider “We will change the World together,” NaMo and Netanyahu script a new... 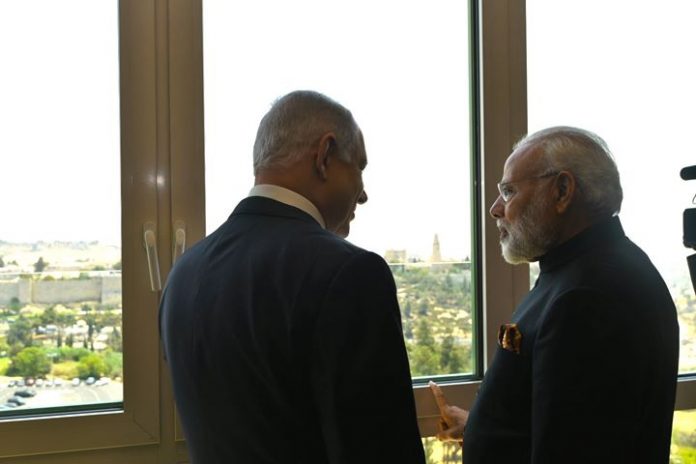 In a new strategic milestone Prime Minister Narendra Modi and Israel’s Prime Minister Benjamin Netanyahu today agreed to fast track their strategic partnership with deeper cooperation on counter terrorism and on security dimension of the partnership, when they met during the Indian PM’s visit to Israel.

Both sides agreed on the common threats from Islamic terrorism and both Prime Ministers meeting Moshe Holtzberg, whose parents were killed in the 26/11 attack, is a clear indicator that both countries haven’t forgotten the terror attack and they may jointly punish the perpetrators of the attack.

“You are welcome to come and stay in Mumbai. We will give you and your family a long term visa,” the Indian PM told Moshe.

In Pictures: Shalom-Namaste: India and Israel embark on new journey of friendship

It also demonstrated that India will keep its diplomatic relationship independent with each other. India had already hosted the leader of Palestine in New Delhi and there was
no dilution of India’s stand on the issue of Palestinian statehood, and this visit showed that India was guided by realism.

So, there were enough indicators that the visit was important, the entire Cabinet lined up at the airport to welcome the Prime Minister, and even the bits of conversation picked by the open mike left on deliberately as the PM landed and was introduced to the dignitaries underscored the deep engagement between the two sides.

The big takeaway from PM Modi’s visit to Israel was the realization of Make with India project, especially in the field of defence. Both leaders showed a commitment to partnering in various fields including cyber security and jointly combating terrorism. “India and Israel will do much more together to protect the interests of both nations and cooperate to combat radicalization and terrorism, especially in cyberspace,” emphasized PM Modi. Additionally, both nations agreed to expand cooperation in the fields of space exploration, water management, agriculture, and technological innovation.