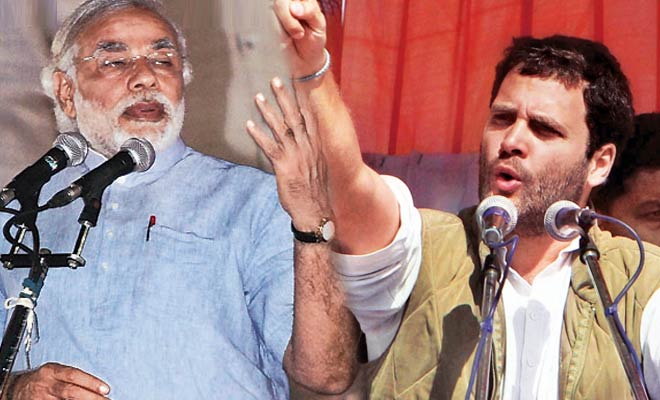 Congress Vice President Rahul Gandhi on Wednesday trained his guns on Prime Minister Narendra Modi over his recent visit to the United States.

Taking to Twitter, Gandhi cited reports from newspapers where the Prime Minister did not raise the H1B issue with President and also how the Ministry of External Affairs (MEA) appeared to downplay the issue of usage of “Indian-administered Jammu and Kashmir” by the US in a statement.

India has a weak PM pic.twitter.com/NKbUO1iOHX

The MEA’s response comes to a query regarding use of the term ‘Indian-administered Jammu & Kashmir’ in the notification of the State Department designating Pakistan-based Syed Salahuddin as a Specially Designated Global Terrorist.

ALSO READ: ‘India for Israel and India with Israel’: PM Modi in meeting…

“The use of the term ‘Indian-administered Jammu & Kashmir’ merely affirms our position that Syed Salahuddin has been involved in cross-border terrorism against India. Similar term has been used in the State Department’s country reports on terrorism brought out every year, including in the period 2010 – 2013, in the context of cross-border terrorism perpetrated on India. India’s consistent position that the entire state of Jammu and Kashmir is an integral part of India is well known,” MEA spokesperson Gopal Baglay said in a statement.