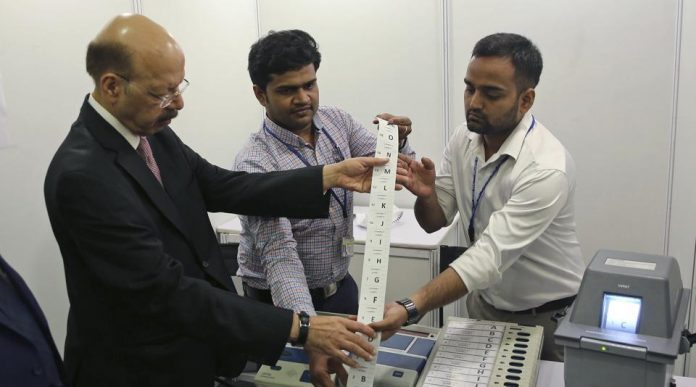 A new ‘M3’-type electronic voting machine (EVM) that is “tamper detect” and will stop functioning if anybody tries to tamper with it, is under production and will be used in the 2019 Lok Sabha elections, Chief Election Commissioner Nasim Zaidi disclosed on Wednesday.

“I must say that the Commission has always been welcoming suggestions and measures to further tighten the EVM’s integrity. Our machines are evolving with new technologies, and currently we are producing M3 machines (third generation EVMs) which have many security features. In common man’s language, they are tamper-detect, that is, if you fiddle with any part of the machine or try to open any screw, any box, it will become dysfunctional,” Zaidi told the media.

The M3 EVM production is beginning from August at the Electronics Corporation of India Ltd (ECIL) and Bharat Electronics Lt (BEL) plants. The new machines will replace the existing ones in phases. It is expected that by September next year, the required number of machines will have been produced.

Zaidi, who demits from office on Wednesday, said that apart from this development, by 2019 all the EVMs will be attached with a Voter Verifiable Paper Audit Trail (VVPAT) units as the EC has already got funds and an order has been placed for them.

Another feature of these new machines, he informed, is self-diagnosis. That is, it can automatically detect any fault with the software or system and will show it in the display.

“The third part is digital certification. The Control Unit and Ballot Unit can communicate with each other. If someone plants a Ballot Unit or Control Unit from outside, the digital signature will not match and the system would stop functioning,” Zaidi said.

“Thirdly, the operation deadlines of EVMs in terms of their productions, transportation, storage, maintenance and security etc are being more tightened. The vehicles carrying the EVMs will be fitted with GPS to monitor their movement,” Zaidi said.

He said that as part of the huge mass awareness programme the EC is launching about VVPATs, paper trail slips in every constituency will also be counted along with the votes upto a certain percentage.

“The candidate has to tell us the name of the polling stations where he wants counting of paper slips and that will be done. I think with this, the issue of EVMs stands closed and its credibility restored,” the CEC said.