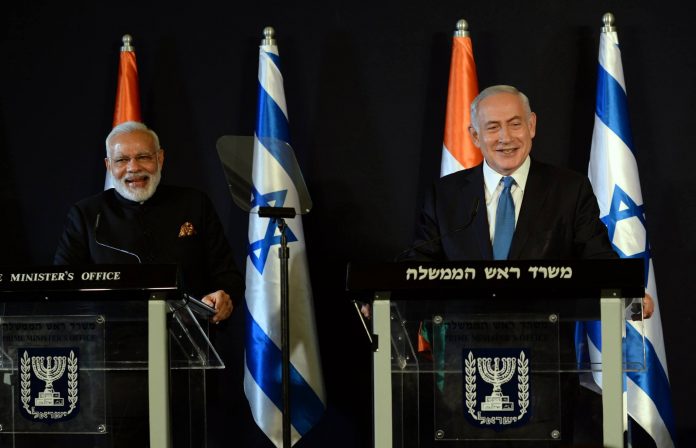 PM Netanyahu began by saying that “India and Israel are changing our world and parts of the world” and that the partnership is a marriage made in heaven, but implemented on earth. The Israeli PM emphasized the potential for both India and Israel to cooperate in diverse fields that make a difference and positively affect the lives of people not only in India and Israel but also in other areas in the world, such as Africa, where both nations can work together for a common goal. PM Netanyahu said that both nations are faced with the challenges of terror but must work together to fight the bad and work for the good.

Prime Minister Netanyahu summarized his statement by saying that the “visit symbolizes a partnership to seek the good, defend the good, achieve the good.”

PM Modi thanked his Israeli counterpart for the exceptional generosity of Israel extended to PM and India. He continued by saying that “in modern journey, paths have been different but belief in democratic values and economic progress have been shared objectives.” PM Modi stated that the visit was not only for exploring bilateral opposition but also help the cause of global peace and stability. PM Modi lauded Israel’s leadership position in the fields of water, agriculture and innovation and added that these were priorities for his own visions for India’s development. The Prime Minister emphasized that India and Israel will do much more together to protect the interests of both nations and cooperate to combat radicalization and terrorism, especially in cyberspace.