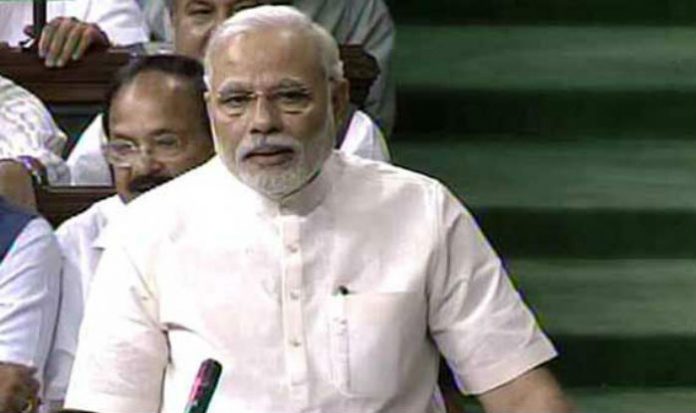 With the historic Goods and Services Tax (GST) becoming a reality, Prime Minister Narendra Modi on Saturday said in a tweet that Former Home Minister Sardar Vallabhbhai Patel integrated India territorially and the GST would integrate the nation economically.

He further said, “GST showcases the power of Team India, It shows how the Centre and states come together to do good for the poor.”

GST showcases the power of Team India, It shows how the Centre and states come together to do good for the poor. pic.twitter.com/LayRxP3nP6

A new era of taxation begins with #GSTForNewIndia. Congratulation to PM @narendramodi ji for unifying the nation economically.

Congratulations India for embarking on the path of a Good, Simple Tax, GST. It’s a historic moment. 1/

My introductory remark at the midnight roll out of #GST https://t.co/VJYFnGrp1E

Even Sagarika Ghose tweeted on hope of bettermen t of the nation from GST:

Got to hand it to @narendramodi for constant unsparing effort. Agree or disagree,he endeavours tirelessly.Hope #GST creates better taxation!

Ending more than 11 years of hectic argument between the Centre and states, the GST was passed and is now set to completely transform the indirect taxation landscape in the country, involving both central and state levies. In a departure from the normal practice, GST will be administered together by the Centre and States.

The biggest tax reform since independence – GST – will pave the way for realisation of the goal of One Nation – One Tax – One Market. It will benefit all the stakeholders namely industry, government and consumer as it will lower the cost of goods and services give a boost to the economy and make the products and services globally competitive, giving a major boost to ‘Make in India’ initiative.

Under the GST regime, exports will be zero-rated in entirety unlike the present system where refund of some of the taxes does not take place due to fragmented nature of indirect taxes between the Centre and the States. However, GST will make India a common market with common tax rates and procedures and remove economic barriers. GST is largely technology driven and will reduce the human interface to a great extent. GST is expected to improve ease of doing business in India.