Global Warming is slowly becoming a matter of concern for everyone in this world. Gradually most of the countries are realising the change in the environment caused by pollution. China, the country with the largest population in the planet is planning something big to curb down increasing pollution in the country. China has tried various techniques, but this one looks like the biggest initiative yet by China to combat Global Warming. After a successful experiment of a tower with vertical forest, a whole city with the vertical forest is now what China is aiming for. The cities blueprints look straight out of a Sci-Fi movie and it can be an ultimate example for every other country to follow. 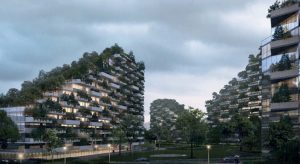 The mammoth task of vertical forest city has been started by Liuzhou and the city covered in the forest will act as a huge air filter, according to the plan. The city complex will be a mile long stretch near the Liujiang River.

The Chinese have planned to build the city by planting 40,000 trees and more than a million plants. It will be hosting 30000 people of the country and will be constructed by an Italian firm. If everything goes expected, the city will soak up 10,000 tonnes of CO2 per year, while generating 900 tonnes of oxygen by 2020.