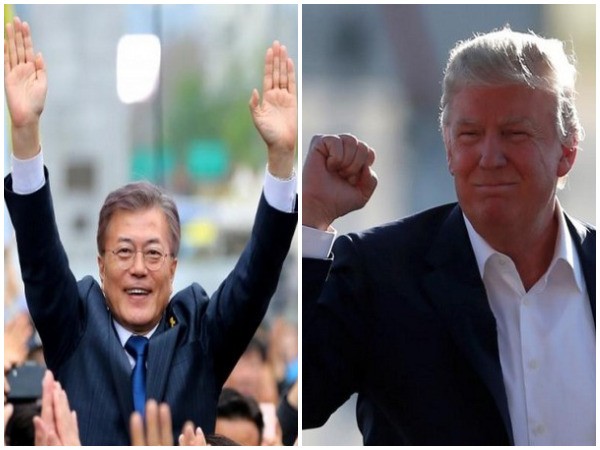 Washington [U.S.A.]: United States President Donald Trump will address areas of disagreement on foreign policy and trade with newly elected South Korean President Moon Jae-in when the two leaders meet for the first time at the White House on Thursday.

The two leaders are also expected to discuss the problem of North Korea, as well as the U.S. trade imbalance with South Korea.

“The two governments share precisely the same goal – the complete dismantlement of North Korea’s nuclear and missile programs. It’s the hard challenge we’ve been wrestling with for decades now. Both have made clear they’re willing and capable of jointly coordinating in achieving that goal,” The Hill quoted a senior administration official, as saying.

“The president’s policy is to substantially increase pressure on North Korea through economic pressure as well as diplomatic pressure in order to change their calculus to have substantive talks with us once they show they’re willing to reduce the threat. Right now we see no evidence they’re willing to do that,” the White House official added.

Trump has even criticised China, North Korea’s largest trade partner, for not doing more to punish the regime.

Trump and First Lady Melania will host Moon and his wife, Kim Jung-sook, over cocktails and dinner at the State dining room of the White House on Thursday evening.

On Friday morning, Moon and Vice-President Pence will lay a wreath at the Korean War veterans memorial on the National Mall, following which a one-on-one meeting between Jae-in and Trump will culminate into an expanded meeting with both of their Cabinets and a joint press statement.