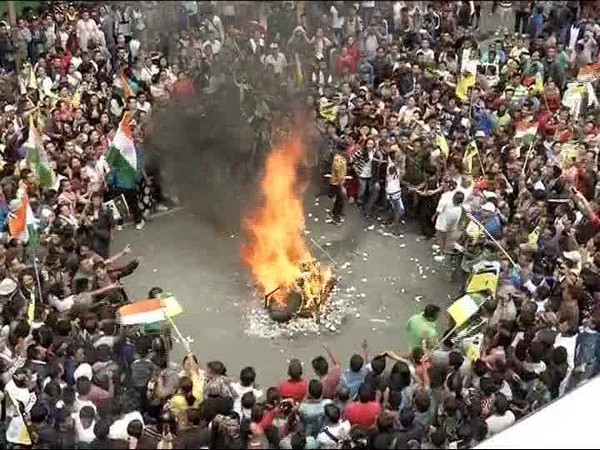 Kolkata (West Bengal): Amidst the ongoing protests in the hills, the Trinamool Congress (TMC) on Thursday categorically stated that Darjeeling is and will remain an inseparable part of West Bengal and if the Gorkha Janmukti Morcha (GJM) has any other demand that can be discussed, then they are welcomed to come forward.

Speaking to ANI, TMC leader Sougata Roy said, “It seems that the GJM is pretty much desperate, but just a few days of agitation will not change the course of history. Darjeeling is and will remain an inseparable part of West Bengal. Any other demand can be discussed, provided violence is withdrawn. The State Government does have a responsibility to maintain law and order which it is trying its best to do. Now it is for the GJM to decide which road they want to take – a mindless agitation or a negotiated settlement”.

Yesterday, the Public Works Department (PWD) office of the Gorkhaland Territorial Administration (GTA) was set ablaze by the GJM. They had also burnt copies of the tripartite GTA accord at several places in Darjeeling.

The landmark GTA accord was signed on July 18, 2011, between the Centre, the Bengal Government, and the GJM, paving the way for a semi-autonomous body to rule the hills.

The burning of the accord symbolises total rejection of the agreement into the struggle for statehood. The GJM took out a ‘Tubelight’ rally in Darjeeling.

Thousands of Morcha supporters came down on the streets to take part in the agitation.