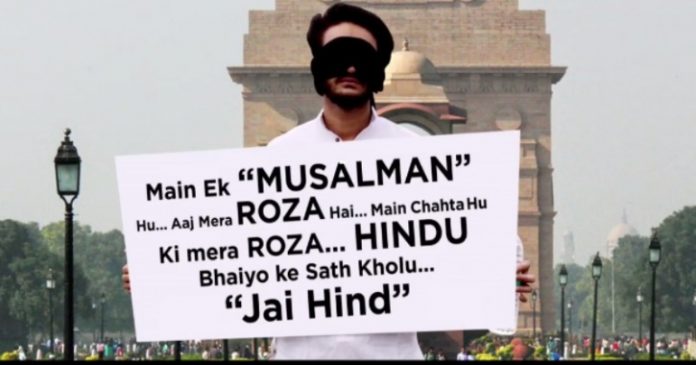 India is plagued by radical elements who threaten to drive a wedge into the unity of this country. Communal antagonism is being spread through nationalist propaganda, in the name of patriotism. In such times, when our country stands divided, this one Muslim man proves that all is not yet lost.

Atif Anwar, through his social experiment proved that brotherhood regardless of religion or faith still exists.

Eid is the most significant festival for Muslims, which marks the end of their month-long fast. This man stood blindfolded at India Gate, New Delhi holding a placard where he asked his fellow Hindus to join in and help him break his fast ahead of Eid.

The response to his experiment was phenomenal. Irrespective of their religion, many stopped and helped him break his fast. The video posted on Facebook has since gone viral, with more than 1.4 million views already.

This goes to show, that no matter what the spirit of India which claims there is Unity in Diversity continues to live on through its people, despite the divisive efforts of radical elements.