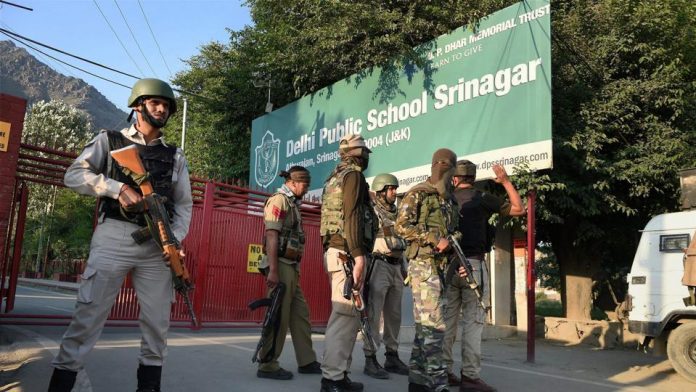 Two terrorists are holed up inside the building of the Delhi Public School in Pantha Chowk, Srinagar and counter-terror operations are underway. The school has been cordoned off and intermittent firing is on.

The 29 Battalion Central Reserve Police Force (CRPF), 7 Rashtriya Rifles (RR) and Jammu and Kashmir Police launched a joint cordon and search operation in the incident area. Restrictions under Section 144 have been imposed from Jammu and Kashmir’s Ram Munshi Bagh to Sempora.

Amid the escalating unrest and terror attacks in the Kashmir Valley, the Jammu and Kashmir state police has directed telecom companies to reduce 3G/4G data services to 2G speeds (not more than 128 Kbps) in the whole of the Kashmir Valley with immediate effect.

Earlier in the day, one CRPF Sub-Inspector lost his life and two jawans were injured after terrorists attacked their vehicle near Srinagar.

Meanwhile, Additional Director General of Police (ADG) of CRPF S.N. Srivastava has said that such a ‘cowardly act’ does not affect the morale of security forces.

“Such cowardly act doesn’t affect the morale of security forces in fact will boost it. We will investigate the matter and will find out the accused behind this. Then we will respond according to that. There is no security lapse,” Srivastava told media.