Prime Minister, Narendra Modi who is currently in the US did not miss the monthly tête-à-tête with countrymen and addressed the nation live soon after reaching the US at 9 pm their time.

The Prime Minister started the speech that was broadcast live by talking about the weather that was especially hot this year across the country and shared the good news that Monsoon was on course bringing relief and respite to the masses.

Paying homage to India’s diversity and calling it a strength, he greeted people on the twin occasions of Jagganath Rath Yatra and Eid. He said that Lord Jagannath who is a patron of the poor rides an unstoppable car or chariot that is unstoppable. He mentioned that the etymology of the English word ‘juggernaut’ is traced back to the unstoppable chariot of the deity of the ‘underprivileged’.

Also Read: PM Modi touches down at Andrews AF base gets warm welcome

Greeting Muslims on the Holy month of Ramzan, the PM shared an inspirational story from Mubarakpur village in Bijnor, Uttar Pradesh. He said that, “about three-and-a-half thousand families of our Muslim brethren reside in that little village and in a way, form a majority of its population. During this Ramzan the villagers decided to get together and construct toilets. Now, to construct these household toilets, the government gives financial assistance, under which, they were provided a sum of 17 lakh rupees. You will be pleasantly surprised and happy to know that, during this holy month of Ramzan, these Muslim brothers and sisters, returned this money to the government, saying, they would construct these toilets with their own labor and money; and that this sum of 17 lakh rupees be used for providing other facilities in the village.”

He felicitated the residents of Mubarakpur for transforming the pious occasion of Ramzan into an opportunity for the welfare of society on. He called, ‘each and everything about them inspiring.’ He wished everyone on the joyous occasion of Eid and appealed everyone to take the country forward together.

He further informed that ‘cleanliness is no longer confined to being a government program. It is getting transformed into a movement by the society and the people.’ With this he declared that five states that have been declared Open Defecation Free. These are, Sikkim, Himachal Pradesh and Kerala, Uttarakhand and Haryana.

Also Read: I appealed to people to give a book instead of bouquet as a greeting

Talking a suggestion from one, Prakash Tripathi, a citizen who had reached out to discuss the ‘Dark’ period of Emergency through Mann ki Baat, he praised Tripathi’s commitment to democracy and said, “Not only is Democracy a system, but also a ‘sanskar’- a part of our ethos. Eternal Vigilance is the Price of Liberty. One needs to be constantly alert about our Democracy.”

He also shared a poem written by Atal Behari Vajpayee a year after Emergency when he had spent time in incarceration,

An emptiness pervading within

The world confined behind bars,

From the earth to the sky,

The eyes are in anticipation

The beloved who went away,

Shall return one day,

Moving on to World Yoga Day celebrations around the world he said, “21st June 2017 – Yoga has permeated the entire world. From the seashores to the mountains, people welcomed the first rays of the sun, with Yoga. Which Indian wouldn’t be proud of this! It isn’t as if Yoga didn’t exist before, but now the threads of Yoga have bound everyone together, and have become the means to unite the world. Almost all the countries in the world made Yoga Day their own. In China, Yoga was practiced on the Great Wall of China, and on the World Heritage site of Machu Picchu in Peru, at 2400 metres above sea level. In France, yoga was performed in the vicinity of the Eiffel Tower. In Abu Dhabi in UAE, more than 4000 persons participated in mass yoga. In Herat, in Afghanistan, on the India Afghan Friendship Dam, Salma Dam, Yoga added a new aspect to India’s friendship. In a small country like Singapore, programs were organised in 70 places, with a week long campaign. On the occasion of International Day of Yoga, the UN released ten stamps. A ‘Yoga Session with Yoga Masters’ was organised at the UN headquarters. The staff of the UN and diplomats from across the world participated.”

He congratulated the people of Ahmadabad who created a world record when around 55,000 people performed Yoga together.

On a lighter note he added that he had the unique experience this time of practicing Yoga in the rain in Lucknow for the first time. 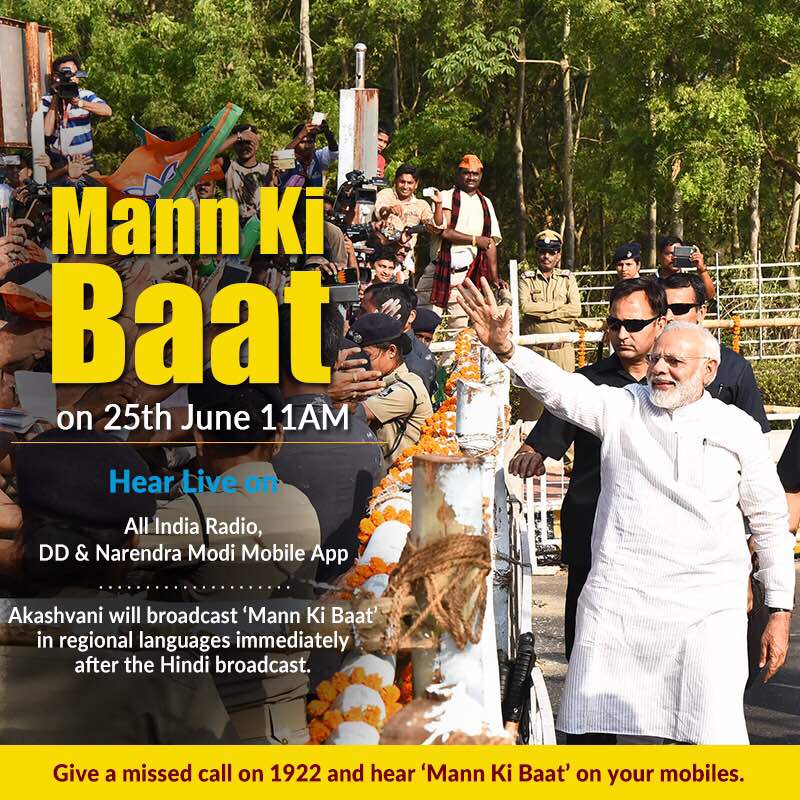 Answering a question by a listener he again brought up an anecdote about historic importance of gifts, saying that a book or a Khadi handkerchief can be great gifts as compared to flowers. He recalled a meeting with the Queen saying, “During my past UK visit, in London, the Queen of Britain, Queen Elizabeth had invited me to dine with her. The atmosphere was imbued with maternal warmth, and I was served with great affection. Afterwards when she showed me a small thread-spun khadi handkerchief, her eyes lit up. With great respect and in an emotion filled voice, she said, that Mahatma Gandhi had sent this handkerchief to her as a wedding gift. So many years have passed and yet, Queen Elizabeth has treasured the handkerchief gifted by Mahatma Gandhi. And she was happy to show it to me, when I went there. As I gazed at it, the Queen encouraged me to touch it. A small gift by Mahatma Gandhi, has become a part of her life and a part of history.”

He said that others may criticize when they try changing old habits but, we must ‘keep making the effort’.

He also congratulated India’s Badminton player, Kidambi Shrikant for winning the Indonesia Open. “I extend my heartiest congratulations to him and his coach for this victory,” he said. He said that the more we promote sports, the more we see the spirit of sportsmanship.